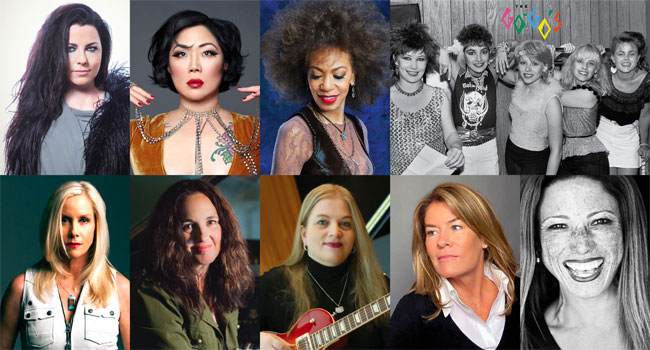 Legendary all-female Los Angeles rock band, The Go-Go’s; iconic lead vocalist of the Runaways, musician, actress and artist Cherie Currie; celebrated jazz and rock drummer Cindy Blackman Santana; Evanescence front woman Amy Lee; and comedian Margaret Cho, are all among this year’s diverse recipients for the 2021 She Rocks Awards. The show will be held virtually and will coincide with the virtual NAMM show. The 2021 She Rocks Awards is hosted by Halestorm’s Lzzy Hale with the pre-show hosted by Yahoo Entertainment/SiriusXM’s Lyndsey Parker.

The Women’s International Music Network (the WiMN) will host the event on Friday, January 22, 2021 at 6:30 pm PT with tickets and VIP offerings open to the public. The ninth annual event continues to pay tribute to women in the music industry and will include live virtual music performances, awards and speeches, celebrity appearances, a fabulous silent auction, and much more, all available online.

A VIP gift box and afterparty are available for the ultimate She Rocks experience.

The Go-Go’s were the first all-female band to top the Billboard charts that both wrote their own songs and played their own instruments; Cherie Currie is a founding member of the pioneering all-female rock band The Runaways; Cindy Blackman Santana is a highly respected jazz and rock drummer who’s performed with Santana, Lenny Kravitz, and many others; Amy Lee is the co-founder and lead vocalist for the rock band Evanescence; Margaret Cho is an Emmy and Grammy-nominated stand-up comedian, actress, fashion designer, author, and singer-songwriter; Starr Parodi is a composer, pianist, conductor, arranger, music director and president of The Alliance For Women Film Composers; Ann Mincieli is a GRAMMY-winning recording engineer, studio coordinator for Alicia Keys and co-founder of NYC-destination studio Jungle City; Sharon Hennessey is co-president and co-owner of The Music People; and Gwen Riley is Senior VP of Music for Peloton Interactive.

Additional honorees and featured guests will be announced soon.

“The She Rocks Awards was created to bring us together and lift us all up with an evening of positive community and shared experience. This year is no different! I am so thrilled to honor these amazing role models and share their inspiring stories,” comments She Rocks Awards founder Laura B. Whitmore.

She Rocks Awards pays tribute to women who display leadership and stand out within the music industry, and has become a standard at the NAMM Show. Previous award recipients include Melissa Etheridge, Pat Benatar, Gloria Gaynor, The B-52s, Suzi Quatro, Colbie Caillat, Sheila E, Chaka Khan, Ronnie Spector, Orianthi, Lisa Loeb, The Bangles, and many more, plus a collection of role models from all walks of the music and audio industries.