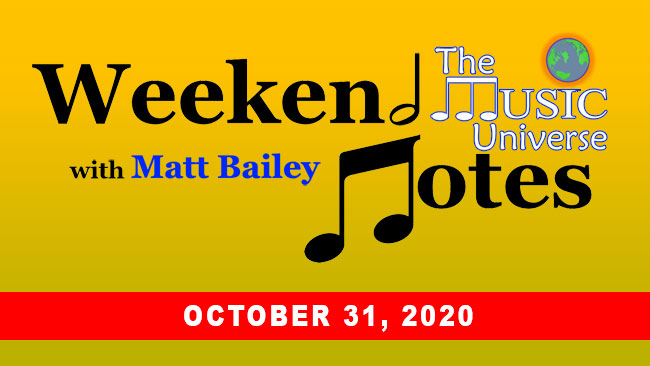 Weekend Notes is back and jam-packed with spook-tacular music headlines for this Halloween 2020.

Our top story this week, 2020 may have been a miserable year, but this holiday season will still be FUN. That’s right…Garth Brooks is dropping his long-awaited studio album November 20th, along with a deluxe version of Triple Live — which was initially released in 2018.

For more on this, we spoke to The Music Universe Editor in Chief and founder Buddy Iahn.

Life-long friends Steve Lukather and Joseph Williams have announced a new Toto lineup with world class players. The band is in motion to bring their Dogz of Oz Tour around the world. These shows will feature all the hits, deep cuts, and solo music from Lukather and Williams individual catalogs.

Joining Toto for this next chapter in their indelible history are bassist John Pierce from Huey Lewis and The News, drummer Robert “Sput” Searight from Ghost-Note and Snarky Puppy, and keyboardist / background vocalist Steve Maggiora who’s played with Elvis and Moms Mabley. Keyboardist Dominique “Xavier” Tapline and multi-instrumentalist/vocalist Warren Ham are continuing their tenure in the ensemble alongside Lukather and Williams.

This marks the 15th incarnation of the Toto lineup.

Crowded House has announced that they will tour New Zealand in March 2021 on the To the Island Tour. The news comes as the band releases its first new music in more than a decade with the debut of the single “Whatever You Want.” The tour and new music feature founding members Neil Finn and Nick Seymour along with producer and keyboardist Mitchell Froom, guitarist and singer Liam Finn and drummer Elroy Finn.

Taylor Swift has garnered a total of 12 new certifications from the RIAA. Among them, her critically-acclaimed, five star 2020 album, Folklore, has achieved gold and platinum status. It became the top-selling record of 2020 worldwide and is the only album this year to cross one million albums in pure sales in the U.S.

This Thanksgiving Weekend, Magnolia Pictures will release Zappa, a documentary that explores the life of Frank Zappa, to theaters and On Demand. With unfettered access to the Zappa family trust and archives, the doc explores the private life behind the mammoth musical career that never shied away from the political turbulence of its time. Writer and director Alex Winter’s assembly features appearances by Zappa’s widow Gail Zappa and several of his musical collaborators.

And now for some music business news.

Staying with Sirius, SiriusXM Holdings, Inc. has completed its acquisition of the Stitcher podcasting platform. With this acquisition, Alongside Pandora, Simplecast and AdsWizz, this latest addition means new ways for creators to find and connect with a broader audience.

And Ticketmaster has announced the development of SmartEvent, a new suite of technology tools that helps fans and venues safely return to live events. Designed with flexibility in mind, SmartEvent gives event organizers the ability to adapt protocols to meet evolving needs of capacity, distancing and other logistics throughout the reopening journey for concerts, sports games, comedy shows and other events.

This Veterans’ Day, Big Machine Label Group and CreatiVets continue their partnership with the release of an upcoming EP via Big Machine Records. The three track EP features Brantley Gilbert, Love And Theft and Kalsey Kulyk, and follows the release of debut album Veteran Songs. CreatiVets empowers wounded veterans to heal through the arts and music. Through songwriting sessions, they are providing Veterans struggling with post-traumatic stress and brain injury the opportunity to use art, music and creative writing to share their experiences and enabling them with tools they can use the rest of their lives.

And finally, Julien’s Auctions has announced that two of the late Eddie Van Halen’s most iconic guitars will take the stage of Icons & Idols Trilogy: Rock ‘N’ Roll, the auction house to the stars’ annual music extravaganza on Friday, December 4th and Saturday, December 5th–live at Julien’s Auctions in Beverly Hills and online at juliensauctions.com.

One of rock music’s most influential guitar legends of all time headlines an all-star lineup featuring hundreds of artifacts and memorabilia owned and used by some of the world’s greatest music artists of all-time including Kurt Cobain, Elvis Presley, Michael Jackson, Madonna, Lady Gaga, David Bowie, Aerosmith and more.

Rest In Peace, Eddie. Hope you are shredding in heaven.

Have a great weekend. Happy Halloween.