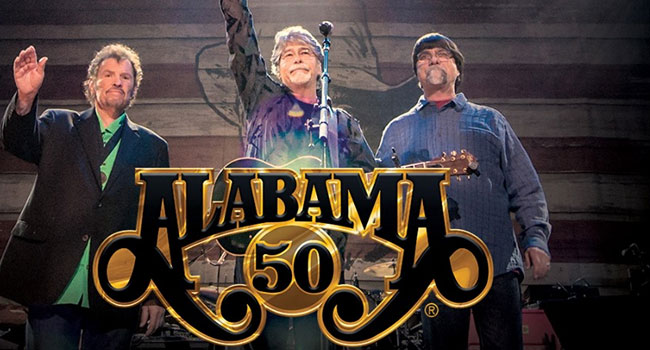 Both legendary groups will perform in Wichita on November 2nd

Seven-time multi-platinum selling band and the most decorated country music group in history Alabama has added yet another arena performance to its extensive 50th Anniversary Tour. Band members Jeff Cook, Teddy Gentry and Randy Owen have tapped very special friends The Beach Boys to join them for a “once-in-a-lifetime” concert on Saturday, November 2nd at 7 pm at the Intrust Bank Arena in Wichita, Kansas.

“Jeff, Randy and I used to listen to the incredible harmonies of The Beach Boys when we started our band 50 years ago,” says Alabama bass player and vocalist Teddy Gentry. “Our goal as a band was to have the same magic as The Beach Boys’ harmonies and unique songs.”

Many guest artists have joined Alabama on the road to help celebrate its 50-year milestone. However, Wichita is the only North American city on the tour to feature a performance by The Beach Boys.

“We are excited to share the stage together with The Beach Boys at this special one-time concert,” Gentry adds. “I think the fans are going to be dancing and smiling all night long. We can’t wait!”

Presented by Outback Presents, tickets go on-sale this Friday, August 16th at 10 am CT at the Select-A-Seat box office or online at selectaseat.com. Earlier this summer, Alabama announced the second string of dates for its cross-country 50th Anniversary Tour commemorating the band’s five decades of music.