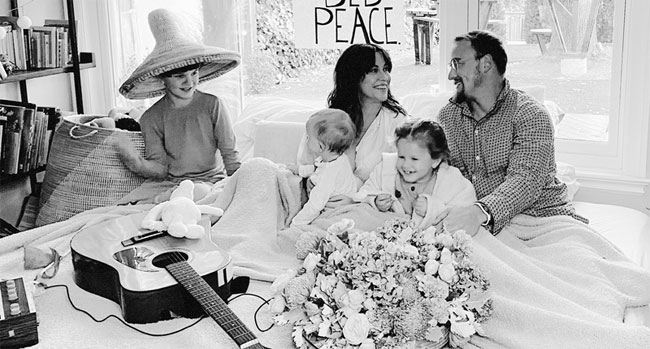 Song was originally written by John Lennon and Yoko Ono

Seven-time GRAMMY Award-winning singer/songwriter Alanis Morissette has announced her cover of “War Is Over” along with an accompanying video. “War is Over” is a cover of John Lennon and Yoko Ono’s original song “Happy Xmas (War Is Over)” from 1971. The video was directed by Victor Indrizzo and features at home moments with her family as well as her bandmates’ families.

“It is an honor to cover this heartwarming song,” Morissette shares of the track. “The lyrics feel more pertinent than ever and this year has been a year of great resilience and adapting and feeling all the feelings. May this song serve as a big hug to you and your sweet families and friends. Everything is going to be okay in the end, and if it’s not okay, it’s not the end. 🙂 xoxoxo”

Since 1995, Morissette has been one of the most influential singer-songwriter-musicians in contemporary music. Her deeply expressive music and performances have earned vast critical praise and seven Grammy awards. Morissette’s 1995 debut, Jagged Little Pill, was just reissued for its 25th anniversary with unreleased bonus tracks. She has contributed musically to theatrical releases and has acted on the big and small screen. Outside of entertainment, she is an avid supporter of female empowerment, as well as spiritual, psychological and physical wellness. In December 2019, Jagged Little Pill: The Musical made its Broadway debut at the Broadhurst Theatre in New York City, and was nominated for fifteen Tony Awards. Most recently, Morissette released her ninth studio album, Such Pretty Forks In The Road, to rave reviews.