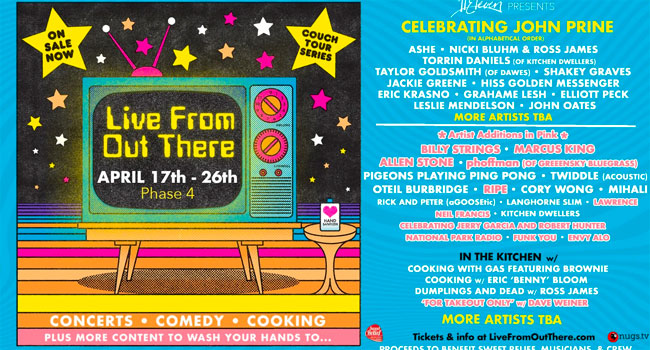 Shakey Graves, John Oates, Ashe and more are on the bill

The mission of “Live For Out There” is simple – to provide viewers a constant flow of never before seen content from artists while generating revenue for the artists and crews involved.

For four weeks and counting, Live From Out There has been providing a wide variety of content streaming to the comfort of people’s homes during this very unfortunate time. Rolling Stone, Pollstar and Celebrity Access found the shows to be noteworthy.

The series has now raised over $250K in four weeks of programming. It has been including sets from artists’ homes and practice spaces, never before seen archival releases, masterclasses, cooking lessons, first-time collaborations and more. COVID-19 has had an unprecedented impact on the live music community; while the safety of our roster, team and fan base is tantamount, we also believe the power of live music is a healing force through uncertain times.

“It’s been truly amazing to see the fans and the community coming together each week, contributing to all those affected by loss of work due to COVED-19. With so much uncertainty around the live touring landscape, we have to come together and do everything we can to help artists and crew stay alive during this time,” says 11E1even Group’s Ben Baruch. “Our platform unlike most, is a paid platform, we aren’t shy to say that we are here to generate revenue for those in need while creating unique content for the fans week after week. Our goal is to keep pushing great content, continue to book a diversified and unique lineup week after week and grow the platform to support artists and all those that have suffered from lost work due to the COVED-19 Outbreak.”

Proceeds from each subscription benefit Sweet Relief’s COVID-19 Fund, an organization using donor-directed funding to provide immediate assistance, lodging, clothing, food and more to the musicians and crew involved in the series as well as music industry workers and artists who have suffered a loss of income due to the recent outbreak and resulting restrictions placed on live events and gatherings.