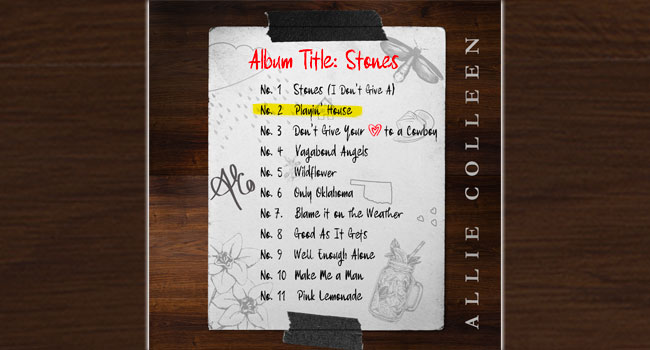 Country singer/songwriter Allie Colleen has announced the release of the first single, “Playin’ House,” from her highly anticipated upcoming debut album, Stones. The heartfelt lyrics were co-written by Colleen, Billy Dawson and Jason Matthews. The new project was produced by Joe Costa and recorded at Allentown Recording Studio in Nashville. “Playin’ House” is available for streaming and digital download on all platforms.

Physical copies of the highly anticipated debut album Stones will be available on April 9th for purchase online at alliecolleenmusic.com with a November 19th release on all digital music platforms.

“This was one of those song titles and ideas I have had in my song idea book forever. Every co-write, the writers would pass on the idea, but everything fell right into place when Billy and Jason loved the idea,” expresses Allie Colleen. “From there, the story came out on its own. Inspired by a relationship between two people I know, came the song all of us hate to relate to… “Playin’ House.”

“Allie Colleen is one of the best voices I have heard in a long while. She is also a wordsmith when it comes to songwriting,” exclaimes co-writer Billy Dawson. “I am so proud of my friend and see huge things coming soon for her!”

Colleen teased the album with us in February during our Country Radio Seminar (CRS) interview with her.