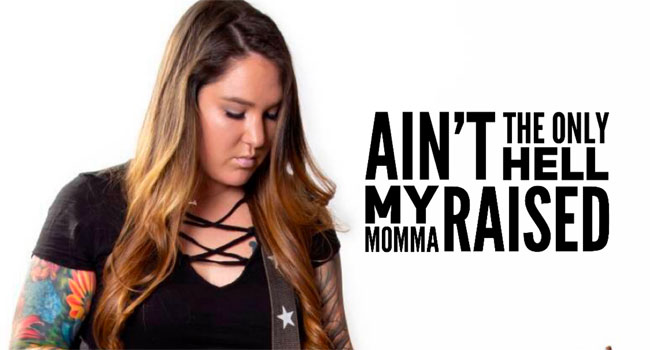 Colleen recently spoke about the song on The Music Universe Podcast

Singer/songwriter Allie Colleen has released new music in time for summer with her intoxicating and rousing single, “Ain’t The Only Hell (My Momma Raised),” with GrassRoots Promotion team at the helm working the country radio markets. The feisty song, produced by Joe Costa at Costa Gold Studio, was co-written by Allie Colleen and Karleen Watts. “Ain’t The Only Hell (My Momma Raised)” is available for streaming and download on all digital music platforms including Spotify, Apple Music, iTunes, Pandora, Google Play, Amazon Music and more.

“This song goes out to all the moms, to all the women who put their hell raising lives on hold to raise their babies,” shares Colleen. “My mom(s) are my greatest role models. I am who I am because of who they are.”

“Allie and I had been talking about working together on a production for a while and I was so excited when she brought “Ain’t The Only Hell (My Momma Raised)” to the table. I loved the imagery of it, the uplifting melody and I could hear how connected Allie was to the lyric because it’s so authentically true to her life,” shares Costa. “Allie’s artistry is the perfect combination of true heart and craft and I am so proud to have played a role in bringing this amazing song by an amazing artist to life.”

“Ain’t The Only Hell (My Momma Raised)” was inspired by the memory of an old photograph which sparked conversation of what their moms were like prior to raising children and how much of their youth carries on in their children.

Colleen talks about the song with Buddy Iahn and Matt Bailey — and even asked our input on the title — during a recent version of The Music Universe Podcast.

Colleen, a Belmont University graduate from Owasso, Oklahoma, performs with a style that is truly her own and she is no stranger to the music industry. Her passion for singing and songwriting since a young age has garnered her a reputation of being a notable songwriter with an iconic-sounding, impeccably strong voice that accents her Americana sound. The room never fails to silence as she begins to sing about the layers of love and heart-break that have shaped her, including some of her newest songs with witty lyrics and a personal connection to the song unlike most today.

Colleen’s work ethics come through as strong and showcase her deep values as she works along-side industry professionals. Her willingness to perform at venues in and around Nashville, along with national exposure opportunities, have honed her music skills. Colleen’s passionate drive and innovative vision set her apart from her peers and resulted in her music and videos going viral and capturing the attention of well-known radio show host Bobby Bones.

One of her original songs, “Close Enough”, gained more than 750k views on YouTube and her organic social media following has continued to increase. Her debut single, “Work In Progress” defines the life that’s shaped her with personal lyrics and transparency in both the vocals and delivery. “Work in Progress” is a sweet sentiment regarding her introduction to the Music Industry co-written with hit songwriter Marcus Hummon and well known studio producer Greg Bieck. She released “Along the Way” to digital music platforms in September 2019 and recently released “Take Up Your Arms” for Sea Turtle Recovery PSA.