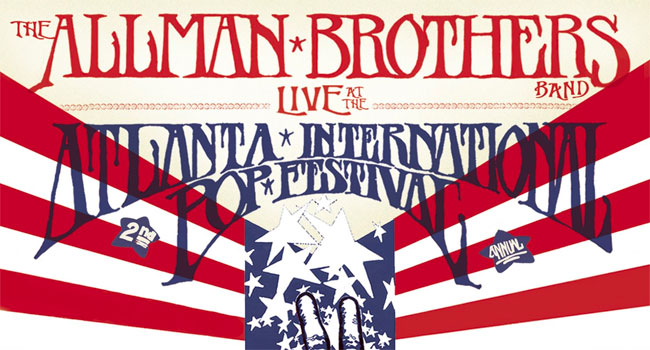 Set will be available on 2 CDs and digitally

The Allman Brothers Band have announced plans to re-issue their legendary performance at the July 4, 1970 Atlanta International Pop Festival. Attended by over half a million people, the band’s epic performances showed clear signs on what was to come on future live albums like 1971’s At Fillmore East and 1972’s Eat A Peach.

Set for digital re-release on October 23rd and on CD in March 2021 from the Allman Brothers Band Recording Company, distributed by The Orchard, the 2 CD set of this highly sought-after audience recording contains over 150 minutes of music from their Friday and Sunday night shows at the massive festival. Featuring their original lineup of Gregg Allman (keyboard and vocals), guitarists Duane Allman and Dickey Betts, Berry Oakley (bass) and drummers Butch Trucks and Jaimoe, the set captures some epic instrumental ABB music in its early development, from a 28-minute “Mountain Jam” to an 11-minute version of “In Memory Of Elizabeth Reed.” There’s also classic ABB staples like “Statesboro Blues,” “Whipping Post” and “Trouble No More.”

The Allman Brothers Band formed in 1969 and their epic live performances and platinum-selling records would make them one of the biggest rock bands in America. They’re members of the Rock & Roll Hall of Fame and have received the Grammy Lifetime Achievement Award and Billboard’s Legend Of Live award. The group played their final show in 2014.