Film is currently in development

Merle Haggard is the subject of an upcoming biopic at Amazon. Amazon Studios has acquired a package that includes Oscar-winning actor Sam Rockwell in talks to play the lead character in which he will also do his own singing. The film takes place during the ’60s.

Deadline reports that Robin Bissell will direct the film, and will pen the script based on Haggard’s memoir, Sing Me Back Home, with his widow Theresa Haggard. Bissell and Haggard will produce the film together.

The film will focus on Haggard’s tumultuous rise from inmate who served three years at San Quentin to the clubs of his Bakersfield hometown to Capitol Records in Los Angeles and beyond. During his time in San Quentin, Haggard was among the prisoners who watched the first prison performance of Johnny Cash in a life changing moment.

The movie will cover his struggle to escape his rough past, including a truancy childhood that involved hopping trains to New Mexico, Texas and Oklahoma, stealing cars and engaging in petty theft. He escaped 17 times from California juvenile facilities as a teen which got him sent to San Quentin as an adult.

Haggard was ashamed of his past and kept his ex-con status hidden until 1969 when he appeared on the Johnny Cash Show. The story will also focus on Haggard’s complicated love affair with Bonnie Owens and more.

With hits like “Okie From Muskogee,” “The Fightin’ Side Of Me,” “Workin’ Man Blues,” “Mama Tried” and more, Haggard accomplished 38 No. 1 hits and 71 Top Tens that made him a country music superstar. He has seven CMA Awards including an Entertainer of The Year title from 1970. Haggard died on his birthday in 2016 at the age of 79 of pneumonia. 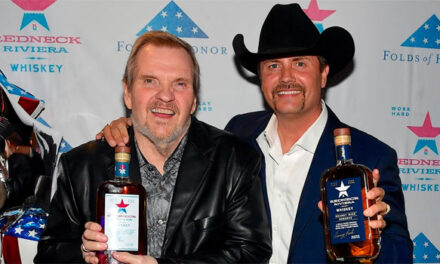