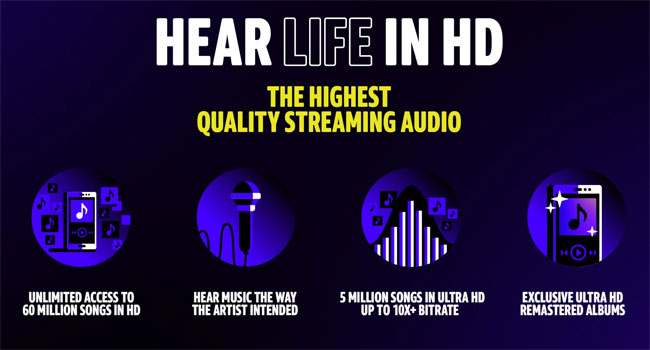 Amazon Music has announced a partnership with Universal Music Group and Warner Music Group to remaster thousands of songs and albums to Ultra High Definition, upgrading the digital streaming audio quality of these songs to the highest available. For the first time, fans will be able to stream music from artists across a broad range of genres and eras, with all of the depth, vibrancy, and emotion from their original recordings, launching exclusively on Amazon Music HD. In addition, music from artists including Eagles, Elton John, Linkin Park, Tom Petty, Ariana Grande, Jon Pardi, Shawn Mendes, Lady Gaga, Lil Tecca, Selena Gomez, Post Malone and more has been remixed in 3D Audio formats including Dolby Atmos and Sony 360RA, offering a truly immersive listening experience for customers.

“We launched Amazon Music HD last year with a promise to always offer our customers the best quality recording available for streaming,” states Steve Boom, VP of Amazon Music. “With this partnership, we are building upon that promise by upgrading existing recordings to make the listening experience even better, and preserving artistic legacy for future generations. We are thrilled to have the support from Universal Music and Warner Music to deliver key recordings from their catalogs, exclusively for Amazon Music customers. We’ll continue to work with more labels to upgrade the digital quality of even more audio recordings, and provide customers with all of the emotion, power, clarity, and nuance of original recordings across all genres.”

With Amazon Music HD, customers can already stream five million songs in Ultra HD (better than CD quality), with a bit depth of 24 bits and a sample rate up to 192 kHz. Customers can also stream more than 60 million lossless High Definition songs, with a bit depth of 16 bits and a sample rate of 44.1kHz (CD quality), and a growing catalog of 3D Audio. Now, Amazon Music is making the biggest catalog of Ultra HD music even bigger, revealing nuances that were once flattened in files compressed for digital streaming or CD manufacturing. All titles resulting from this Ultra HD music partnership will be delivered in 24 bit and 96 kHz or 192 kHz. Hundreds of albums including Kid Cudi’s Man On The Moon: The End of Day; Nirvana’s MTV Unplugged in New York; Waylon Jennings’ Don’t Think Twice; Diana Ross’ Diana & Marvin; B.B. King’s Lucille; Lady Gaga’s Joanne; Ariana Grande’s debut album, Yours Truly; 2 Chainz’s The Play Don’t Care Who Makes It; J. Cole’s album KOD; and Bob Marley and the Wailers’ Natty Dread, have already been remastered and will soon be available to stream in Ultra HD.

“Amazon Music continues to push the boundaries in sound fidelity and innovation, and we’re thrilled to partner with them to accelerate the availability of our catalog in the highest quality formats possible and to provide new experiences in immersive audio,” shares Michael Nash, Executive Vice President of Digital Strategy at Universal Music Group. “Our announcement today is the next big step in an ongoing partnership and music fans on Amazon Music HD can look forward to incredible new ways to experience the latest releases, as well as their favorite songs from Universal Music Group and our labels.”

“We’re always excited about new opportunities for fans to experience music in the highest sound quality available, exactly as the artist intended,” adds Kevin Gore, President of Global Catalog, Recorded Music at Warner Music Group. “With Amazon Music HD, 3D Audio, and with the Echo Studio, music lovers are now able to immerse themselves in the original recordings at an unprecedented level of fidelity for a price that had previously been out of range. Warner Music is proud to partner with Amazon Music on this initiative and will continue to deliver groundbreaking new music from the world’s greatest artists along with iconic albums and songs from our unparalleled catalog.”

In addition to Ultra HD remasters, select albums and songs will be remixed in 3D Audio formats such as Dolby Atmos and Sony 360RA. Listeners will be able to stream these 3D mixes when listening through Amazon Music HD on Amazon’s groundbreaking high-fidelity smart speaker, Echo Studio. When paired with an Echo Studio, customers will experience immersive audio, which brings listeners closer to their favorite artists and songs, allowing them to experience music the way artists intended. The world’s biggest recording artists are quickly adapting these immersive formats. Albums including Tom Petty’s upcoming Wildflowers & All the Rest; Eagles Live From The Forum MMXVIII; Linkin Park’s 20th anniversary edition of Hybrid Theory; the Ramones’ eponymous debut album; Lady Gaga’s Chromatica; Post Malone’s Hollywood is Bleeding; and Selena Gomez’ Rare, will soon be available to stream in 3D Audio.

“I’m excited for everyone to hear my new album All Rise in the very highest audio quality possible,” states Porter, a two-time Grammy winner for Best Jazz Vocal Album. “When I first heard my songs mixed in Dolby Atmos, I was amazed by the way it sounded – almost like being back in the studio! I’m looking forward to sharing my music in this new, immersive way.”

At just $12.99/month for Prime members and $14.99/month for Amazon customers, or an additional $5/month for current subscribers (Individual or Family Plan), Amazon Music HD makes high quality, lossless audio accessible to all music fans. Amazon Music HD is currently available to stream in the US, UK, Germany, and Japan.