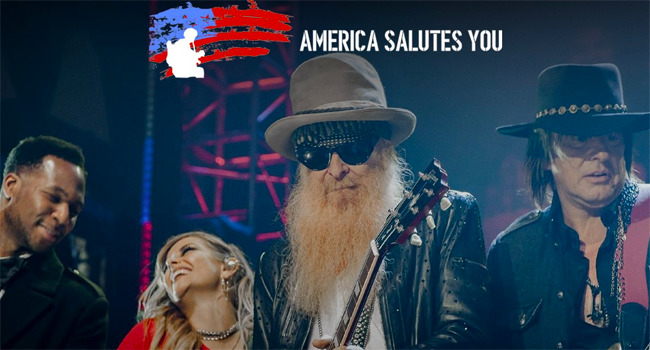 Event will broadcast and stream during Veterans Day week

America Salutes You, its sponsors and charitable partners are pleased to announce that Guitar Legends 4 will be broadcast and streamed on multiple networks the week of Veterans Day, Wednesday, November 11th. All four major networks’ platforms are participating this year: Fox broadcast stations, local ABC digital broadcast stations, ViacomCBS’s CMT and MTV Classic, along with cable channels AXS, Circle TV, RFDTV, and via the Armed Forces Network and the benefit concert will also be streamed on YouTube, Amazon, Fox Nation, Peacock, PLUTO, Apple Music.

America Salutes You, now in its fifth year, is partnering for the first time with the US Department of Veterans Affairs to help deliver their messaging on veterans’ mental wellness and suicide prevention, while raising awareness for a range of veterans, military, and first responder non-profits, while also highlighting the work of doctors and nurses on the front lines.

“America Salutes You continues to assist our men and women in uniform, our veterans, our first responders, and all their families,” says Bob Okun, CEO of America Salutes You. “It is an honor to partner this year with the US Department of Veteran Affairs to support veterans mental wellness and suicide prevention.”

One hundred percent of public donations will go to support the various non-profits and will be raised via text and online fundraising during broadcasts and streams. This year’s charitable recipients include TAPS, Heart and Armor Foundation for Veterans Health, The McCain Institute Foundation, CreatiVets, Operation Stand Down of TN., Veterans Support Foundation, Patriotic Service Dog Foundation, and Bridging the Gap Foundation.