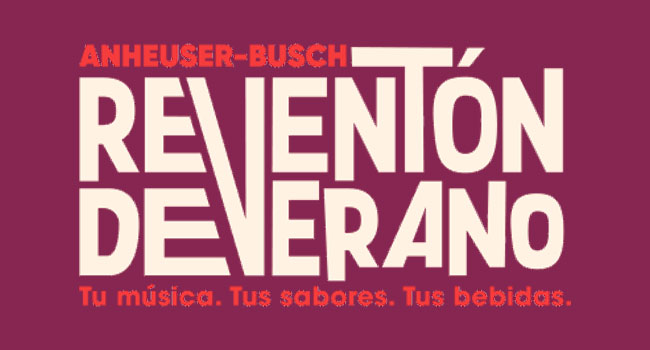 Mark your calendars, get ready to turn up the volume and grab a few cold ones! As we move from spring to the kickoff of summer, America’s leading brewer Anheuser-Busch is hosting “Reventón de Verano” – a feel-good, virtual livestream event bringing people together in the comfort of their homes for a digital celebration of Hispanic culture, music, and community. The virtual show produced by First Tube Media is led by co-executive producers Marcos Cline-Márquez and Kevin Abrams.

With Anheuser-Busch’s year of firsts – as most recently seen with its first-ever company Super Bowl spot and ‘Not A Sports Show’ talk show debut on streaming platform Ficto – the portfolio of iconic brands is building upon its momentum for their most exciting livestream festival yet. “Reventón de Verano” will bring together a mix of some of the hottest entertainers and personalities in the industry for one collaborative show on Sunday, May 2nd from 6-9 pm ET.

“I’m so excited for us all to come together for the Reventón de Verano festival to celebrate our music and culture for the kick-off to what we’re all hoping will be an epic summer,” states global superstar Becky G.

Take a journey with Michelob ULTRA Pure Gold as global superstar Maluma, showcases his musical evolution with a performance for the first time from his latest album, #7DJ, against the backdrop of his latest sustainable art gallery installation along with Federico Uribe in Miami.

Presidente joins multi-platinum award-winning artist, Prince Royce as he heads back to his Bronx, New York roots and takes viewers through an intimate performance in his home borough.

Bud Light Seltzer Sessions is back with a takeover by superstar Myke Towers, a multiple Latin American Music Awards nominee including, “New Artist of the Year.” Myke will be performing songs off his new album from his home island of Puerto Rico, featuring a special guest appearance you won’t want to miss.

Put on your dancing shoes as the sun sets and get ready for Michelob ULTRA Pure Golden Hour Sessions featuring singer, songwriter, actress and activist, Becky G as she takes festival attendees through some of her never-before-performed songs along with her well-known hits in her hometown of Inglewood, CA.

Grab a Stella Artois and join Eva Longoria, with a special performance by Leslie Grace and guest appearances by Wilmer Valderrama and Karen Gonzalez during Stella Sessions, as she shares some of her favorite culinary recipes.

Tune in for a passionate performance by Chilean singer-songwriter and Latin GRAMMY Award-winning artist Mon Laferte during the Cut Out with Cutwater livestream from a rooftop overlooking the LA city skyline at sunset.

“One of the key pillars of our consumer-centric marketing strategy is to make our brand connections relevant and meaningful to the people we wish to serve,” says Marcel Marcondes, CMO, Anheuser Busch. “Reventón de Verano is a great example of how we can use the power of our incredible portfolio to continue to reinvent the way our brands show up in people’s lives. I hope the show provides a fun opportunity for 21+ friends and family to come together over a beer, seltzer, or cocktail and enjoy the incredible performances!”

The performances aren’t the only thing that’s heating up. For a chance to virtually meet artists prior to and following the show, and win prizes including merch, swag and autographed photographs, consumers should RSVP for the festival at ReventonLive.com.