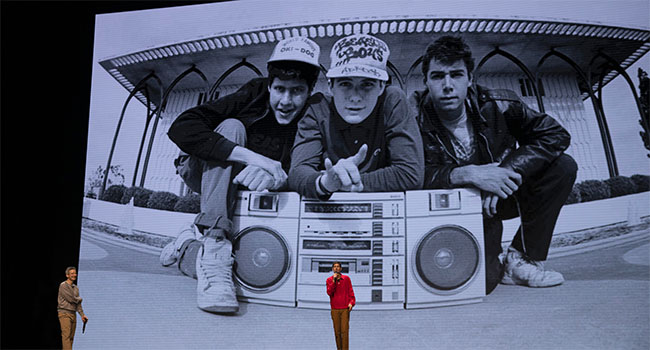 New film directed by Spike Jonze, and written by Beastie Boys Mike Diamond and Adam Horovitz along with Jonze

Apple has announced that it has acquired Beastie Boys Story, a new nonfiction film from Grammy Award-winning Beastie Boys members Mike Diamond and Adam Horovitz and Academy Award-winning director Spike Jonze. A special cut of the documentary feature will open exclusively in select IMAX theatres for a limited engagement April 3rd, before premiering globally on Apple TV+ on April 24th.

Beastie Boys, Mike Diamond and Adam Horovitz, tell you an intimate, personal story of their band and 40 years of friendship in this live documentary experience directed by their longtime friend and collaborator, and their former grandfather, filmmaker Spike Jonze.

The film is set to premiere on the heels of the 26th anniversary of the release of Beastie Boys’ No. 1 charting 1994 album, Ill Communication, and reunites Beastie Boys with director Spike Jonze over 25 years after directing the music video for the album’s immortal hit single, “Sabotage.”

The project grew out of Adam’s and Mike’s collaboration on their bestselling “Beastie Boys Book.”

The film is produced for Apple by Fresh Bread and Pulse Films in association with Polygram Entertainment. The deal was negotiated by Endeavor Content and CAA on behalf of the filmmakers.