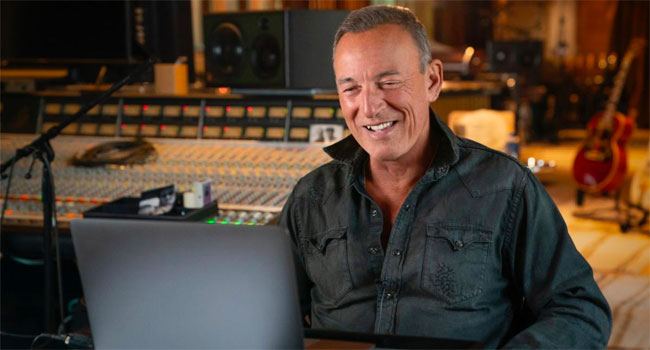 Leading up to the Friday, October 23rd, release of Bruce Springsteen’s highly anticipated 20th studio album Letter to You – the first recorded live and together with the E Street Band since 1984’s Born In The U.S.A. – Springsteen and Apple Music have planned a week of music and events including a brand new radio show, an exclusive album listening party, the anticipated release of his documentary film and more.

To kick off the celebration, Springsteen sits down for an in-depth exclusive interview with Apple Music’s Zane Lowe airing Monday (Oct 19th). The interview will also be available on Apple Podcasts.

Fans can expect a new episode to drop every day this week at 4 pm ET simultaneously on the new Apple Music Hits radio station as well as Bruce Springsteen’s exclusive SiriusXM channel E Street Radio, on SiriusXM radios (channel 20) and on the SiriusXM app. All episodes will be available on Apple Music on demand following broadcast. Additionally, the special series will replay on SiriusXM’s E Street Radio on Monday, October 26th through Friday October 30th.

The new Apple Music Hits radio station launched earlier this year and offers a full catalog of the biggest songs fans know and love from the ’80s, ’90s, and 2000s as well as remarkable new shows from notable artists and hosts, connecting listeners with the stories behind the most popular songs in the world.

On Thursday, October 22nd, its all Springsteen all day with a full 24-hour Bruce Springsteen music video takeover on the brand new Apple Music TV that will lead right into the “New Music Daily Present” album listening party and fan event. During the event the rock icon will spend some time hanging out with 1,000 of his Apple Music super fans, share brand new music, preview clips from the anticipated Letter To You documentary premiering on Apple TV+ and participate in a live fan Q&A moderated by Zane Lowe.

New Music Daily Presents is a series of Apple Music hosted virtual listening parties, harkening back to the album listening parties of yore but now with almost unlimited, ways for artists to treat their biggest fans to something special before releasing new music to the world. Acting as an event extensions of some of Apple Music’s most popular and influential playlists, these virtual listening parties could include everything from unreleased tracks, to special guests and will also give fans the opportunity to chat live with their favorite artists. Subscribe to the New Music Daily playlist on Apple Music.

Bruce Springsteen’s Letter To You will premiere on Apple TV+ on Friday to coincide with the album release. The documentary pays tribute to The E Street Band, rock ‘n’ roll, and the way music has shaped Springsteen’s life as the artist reflects on love and loss while recording with his full band live in the studio for the first time in decades.

Last week, Springsteen teamed with Twitter to create an Emjoi based on the iconic cover for his 1984 album Born In The USA, photographed by Annie Leibovitz. The photo used was actually featured on the 45 single cover of the track, and not the album itself, and later used for as the cover for a Rolling Stone ’80s retrospective. The Emoji is seen when Springsteen and LetterToYouFilm are used as hashtags on the platform.