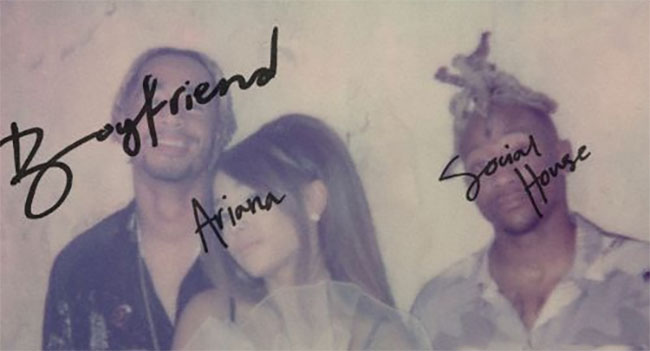 Multi-Platinum recording artist Ariana Grande and buzzing LA singer, songwriter and producer duo Social House release their new song “Boyfriend” via Schoolboy Records/Republic Records. The video made its broadcast premiere on MTV Live, mtvU and the iconic Times Square Viacom billboard, and it will also air on MTV’s Fresh Out Fridays and TRL.

“We’ve always had so much fun working with Ariana, so we’re really excited for this song to finally be out in the world and for our fans to hear it!” Social House says. “We hope everyone loves it as much as we do.”

Social House — made up of Michael “Mikey” Foster and Charles “Scootie” Anderson — are set to release their debut EP Everything Changed… on Friday, August 9th, which features their latest single “Haunt You.” Born and raised in Pittsburgh, PA, Foster and Anderson met by way of producer Tommy Brown, sharing a house and creative hub in Sherman Oaks, CA. Together with Brown, they collectively penned and produced multi-platinum No. 1 smashes, such as “Thank U, Next” and “7 Rings” for Grande’s blockbuster thank u, next album. Their 2018 debut single “Magic in the Hamptons” featuring Lil Yachty has surpassed over 100 million cumulative streams to date and paves the way for their upcoming EP.