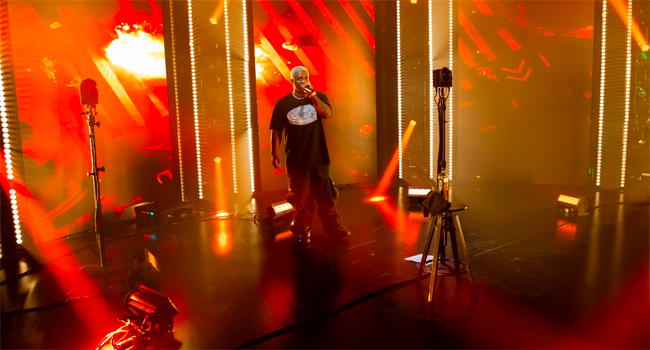 Rapper, producer, and songwriter A$AP Ferg will be performing hits from his new album, Floor Seats II for the first time ever on MelodyVR for its Live from LA series, this October 22nd at 9 pm EST/6 pm PT/2 am + 1 day BST on the MelodyVR app.

Fans around the world will be transported to the music platform’s state-of-the-art Los Angeles studio space to join the exclusive immersive performance. Viewers can choose their camera position within the app, and virtually jam to hits including “Move Ya Hips”, “Marilyn Manson” and “Hectic” on any smartphone or VR headset.

“This is the first performance I have done since the pandemic started, and I will be performing Floor Seats II live for the first time ever,” states Ferg. “My concert with MelodyVR is allowing me to get super close with my fans – I get to talk to them and walk them through each song – that’s why this is different than any other performance. I am bringing the club to your living room or kitchen – I want to see you turn up in the kitchen!”

A$AP Ferg released Floor Seats II on September 25th and the project has already made history: “Move Ya Hips”, with Nicki Minaj and MadeinTYO, is Ferg’s highest charting single ever, having reached No. 19 on the Billboard Hot 100. The Floor Seats series is designed to put you courtside for Ferg’s life. The first installment was released in 2019 and this next chapter takes the basketball concept to a new level, with NBA stars past and present doing drops across the project. Jaylen Brown, Damian Lillard, and JaVale McGee are all in the mix, demonstrating the powerful relationship between basketball and hip hop. Other album guests include Diddy, Marilyn Manson, Tyga, Mulatto, Lil Wayne, Jay Gwuapo, Antha Pantha, Nicki Minaj, MadeinTYO, and Fivio Foreign. Floor Seats II is out now via A$AP Worldwide/Polo Grounds/RCA Records.

MelodyVR’s Live from LA series was developed to provide music lovers with incredible up-close sets by artists across genres. Musicians featured so far include Cypress Hill, Katelyn Tarver, Kesha, JoJo and Nelly and many more. In July, MelodyVR broadcasted Wireless Connect from London and L.A., a virtual version of the former’s long-running Wireless Festival. Featuring immersive VR performances from 70 artists including Saweetie, Rae Sremmurd and Sheck Wes, fans tuned in from more than 34 countries. And in August, MelodyVR announced the acquisition of Napster, laying the foundations for a world-first music offering combining immersive live performances and music streaming.