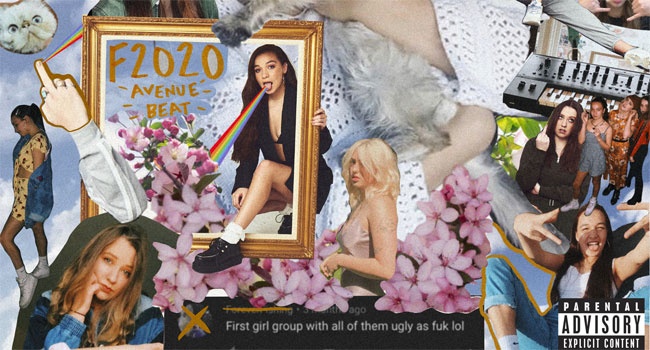 Sam Backoff, Savana Santos and Sami Bearden, known as Avenue Beat, have skewered the pandemic, social isolation, dead pets, bad romance and a failed single as they surreptitiously released the explicit “Lowkey Fuck 2020″ on TikTok. Seven million hits 48-hours later, they’ve been tweeted by TechCrunch Editor-in-Chief Matthew Panzarino as the “Song of the Year,” cited by Vice and Lefsetz, plus endorsed by artists like Maren Morris and Sara Bareilles.

“Lowkey fuck 2020/Still sad still ain’t got no money/I ain’t got a watch up on my wrist/I just got some shit I gotta fix,” the song reads.

Evoking Robert Palmer’s dead-panned vixens of “Addicted To Love,” Avenue Beat is nobody’s back-up prop. The trio of theater nerds from Quincy, Illinois write, program, harmonize and conceptualize everything – commando-style – with a wink and nudge to how fucked things can be.

Just as importantly as the low impact track rolls and their angelic harmonies rise, the video behind them calls out the social injustices plaguing their conscious. Images of Justice for George Floyd, Breonna Taylor, Ahmaud Arbery, Elijah McClain and Tony McDade, the postponed Olympics, President Trump, killer hornets, Kobe Bryant, the Australian wildfires, hazmat suits and their extended middle finger offer a time capsule of how hard the year is sucking.

Exactly what you’d expect from underneath the baggy clothes and wicked side-eye, the three genre fluid creators distill the angst of their generation. Whether it’s the gently candid “I don’t really like your boyfriend,” to hype their friend to the passive aggressive ways of toxic masculinity or “thank you anxiety,” written shortly after moving away from home, the way social awkwardness makes life patently awful, this is the current Generation Next swims in.

“For unnecessarily overthinking what I’m thinking/Every time I’m thinking about something I don’t wanna think about/…For all the thoughts that I can’t shake/And all the risks that I won’t take/And every mental breakdown that I have/Thank you anxiety.”

Recognizing the narrowing of the portal, the increased speed of life, the impossible expectations and the shrinking realm of opportunities, Avenue Beat continues doing what they do best: laugh and tell the truth. Being honest, real and up front, they’re placing the blame squarely where it belongs: a year gone massively, horribly wrong.

“Okay, that was a lot, the problems I got are/Honestly probably not that bad when I compare them to some shit y’all have/But I’m just stating the facts this year is just whack/Emotionally I am lonely and anxious and mad/And if you feel me on that… Lowkey fuck 2020.”

They may not have any answers, but they believe in collective consciousness. Having written the song, that pretty succinctly says it all, they just want you to sing along.

The title will be shorted to “F2020” as it’s released digitally on Friday, July 10th.