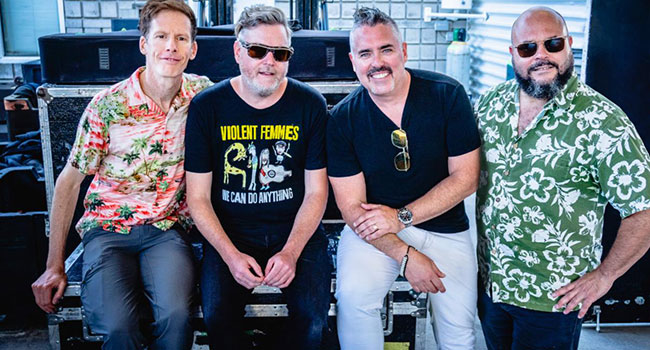 Recorded at the fabled Morrison, CO amphitheater in June 2015 during the Ladies’ Last Summer on Earth Tour, the footage captures the rock icons’ incredible live energy, camaraderie, and musicianship that stand as a testament to the band’s remarkable longevity in an ever-changing musical landscape. The live stream features a new exclusive interview where the band will discuss their most fun and memorable stories from performing at Red Rocks over the years, as well as commentary from Ed and Tyler throughout the show.

The show’s opening will be shown on the band’s Facebook and YouTube. From there you will be able to purchase a ticket for the rest of the show at Nugs.net.

Barenaked Ladies released a special live album from this show. BNL Rocks Red Rocks features some of the band’s biggest hits and fan favorites and is available digitally.

BNL takes fans “Behind the Song” on TikTok, in a video that has amassed over 2.4 million views to date.

BNL have been staying busy during quarantine with Facebook Livestreams along with their #SelfieCamJams, performing deep cuts and fan favorites from their homes, even bringing in surprise guests. In April, they did a family-fun “Snacktime” #SelfieCamJam for kids of all ages. Many familiar faces made a special appearance to share their favorite snack, like Sarah McLachlan, Tom Greene, KT Tunstall, The Count, and Darius Rucker of Hootie and the Blowfish, who Barenaked Ladies toured with in 2019. The band also teamed up with Michael Bublé and Sofia Reyes for a timely single “Gotta Be Patient,” with all proceeds to be donated to charity.

To date, the band has created 23 SelfieCamJams, the latest being “Narrow Streets” which is in support of Global Citizen and their Global Aid For Lebanon campaign.

BNL’s extensive 2020 touring plans are postponed until 2021. This includes a headline tour of the UK and their Last Summer On Earth tour of North America with Gin Blossoms and Toad the Wet Sprocket. This will be the sixth edition of their Last Summer On Earth tour, following last summer’s critically-acclaimed shows with Hootie & the Blowfish. Some of their previous guests have included Cracker, Big Head Todd & the Monsters, Blues Traveler, Guster, Ben Folds Five, Violent Femmes, Colin Hay, OMD, Howard Jones, Better Than Ezra, and KT Tunstall.