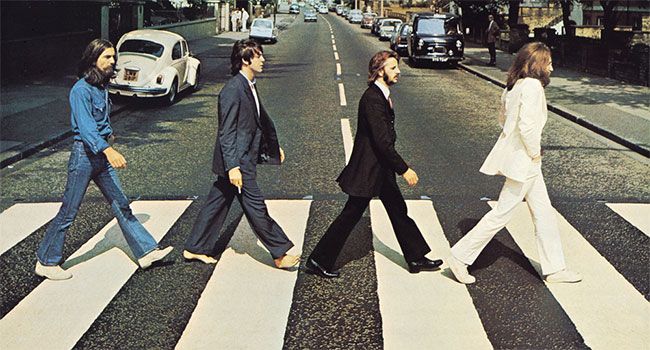 This week is the 50th anniversary of The Beatles iconic Abbey Road album. To celebrate, The Beatles will release a first-look trailer and launch a Premiere Watch page for the brand new music video for George Harrison’s transcendent, timeless song “Here Comes The Sun” from the project today (Mon, Sept 23rd) at 9am PDT / noon EDT / 5pm BST. The album’s 50th anniversary is Thursday, September 26th, and the group will host a global premiere event across the official YouTube channels for The Beatles, John Lennon, Paul McCartney, George Harrison, and Ringo Starr. The video will premiere at 9:02 am PDT / 12:02 pm EDT / 5:02 pm BST and fans can tune in an hour ahead, at 8 am PDT / 11 am EDT / 4 pm BST, for an engaging 60 minute countdown to the music video’s worldwide debut. Fans can be apart of the premiere.

The “Here Comes The Sun” music video welcomes the viewer into Abbey Road Studios’ Studio Two, where The Beatles famously recorded most of Abbey Road, to experience a unique and moving sunrise above the band’s instruments and gear. Working closely with Apple Corps Ltd., the video is directed by Trunk Animation’s director team Alasdair + Jock (Alasdair Brotherston and Jock Mooney) and produced by Trunk’s Maria Manton. The video’s sun centerpiece was filmed as it was meticulously crafted on-set in Abbey Road’s Studio Two. The video features photos from the Apple Corps archive, and photos and footage shot by Linda McCartney supplied by Paul McCartney.

The Beatles will celebrate Abbey Road with a suite of beautifully presented Anniversary Edition packages to be released this Friday, September 27th by Apple Corps Ltd./Capitol/UMe. The album’s 17 tracks are newly mixed by producer Giles Martin and mix engineer Sam Okell in stereo, 5.1 surround, and Dolby Atmos, accompanied by 23 session recordings and demos, most of which are previously unreleased. The new music video for “Here Comes The Sun” features the song’s new stereo mix.