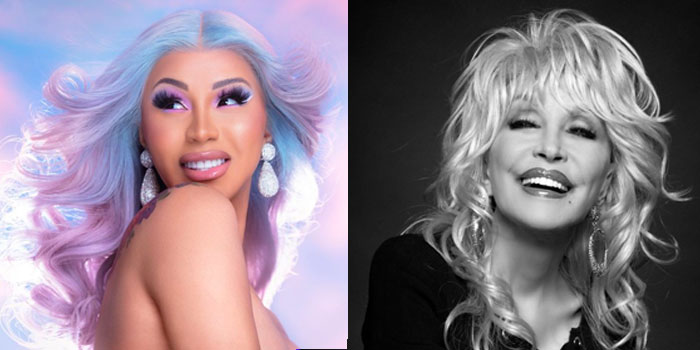 Billboard has announced the first group of female powerhouses who will be honored at its 15th Annual Women in Music Event, including Cardi B, Chloe x Halle, Dolly Parton, Dua Lipa, Jennifer Lopez and Jessie Reyez. Hosted by singer-songwriter and acclaimed director and producer Teyana Taylor, the high- profile event is held in conjunction with the release of Billboard’s Women in Music issue and will stream live December 10th on billboardwomeninmusic.com at 8 pm EST.

Taylor, who recently covered the Hip-Hop and R&B Power Players issue, will serve as host of the event for the first time, crowning a year that had the R&B queen collaborating with Kehlani, Elton John and Missy Elliott, as well as releasing her critically acclaimed project, The Album, this past June.

Cardi B will be presented with the elite Woman of the Year Award, which is awarded to an act whose music, performances, cultural influence and activism has defined the year.

Jennifer Lopez is the recipient of this year’s Icon Award, which celebrates an artist whose impact on the music industry and greater artistic community has been immeasurable. She will join a select group of women who previously received this prestigious award, including Alanis Morissette, Cyndi Lauper, Mary J. Blige, Shania Twain and Aretha Franklin.

Dua Lipa will receive the Powerhouse Award, which recognizes an act whose music dominated streaming, sales, radio and the conversation this year. The global pop superstar has shown us the positive impact that music can have during difficult times, and has continued to be an outspoken advocate and ally for change.

Dolly Parton will be honored with the Hitmaker Award. The award recognizes a songwriter whose compositions have impacted the culture in a crucial way. Parton has been an inspiration for other female songwriters for decades, creating as many chart-topping hits as her male counterparts while also encouraging women to take ownership of their songs.

The recipients of the 2020 Executive of the Year Award, Brianna Agyemang and Jamila Thomas, are the trailblazers behind the #TheShowMustBePaused movement that quite literally pushed the pause button on the multibillion-dollar music industry in the wake of the murder of George Floyd.

Music duo and sisters Chloe x Halle will receive the Rising Star Award Presented by Honda, which honors a fast-rising act that’s already shaping the culture and promises to grow its influence for years to come. They have quickly made their way in the music industry, growing their talents as songwriters and producers without compromising their creative vision.

Songwriter Jessie Reyez will be honored with the American Express Impact Award, which recognizes female changemakers in the music industry. Reyez, a native of Toronto with Colombian roots who released her debut album in March 2020, Before Love Came To Kill Us, continues to raise awareness about social issues and injustices around the world, inspiring us all to make an impact.

This year’s event will be sponsored by Honda and American Express.