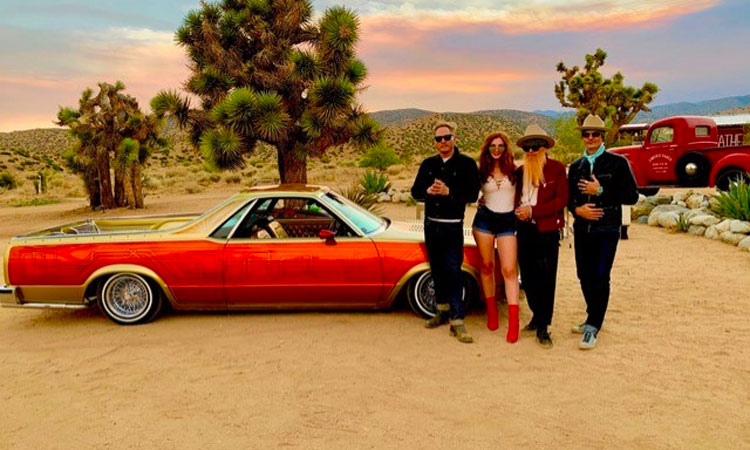 Last Friday, June 4th, marked the release of Hardware, the latest solo album from ZZ Top’s Billy F Gibbons. The new album, out from Concord Records, has been lauded upon its release by both fans and critics alike. “She’s On Fire,” the fourth video from the album has just been posted.

As with “West Coast Junkie,” “Desert High” and “My Lucky Card,” the new clip was shot by Texas filmmaker Harry Reese who, essentially, worked alone to capture the hot, manic and atmospheric mise-en-scène. The heat was real as the temperature at Rimrock Ranch, the video shoot’s location at Pioneertown in California’s high desert at hovered above 115 degrees while a blaze had broken out a few miles away in Palm Springs giving the production a smoky look.

“The video is really an encapsulation of many of the themes touched upon in Hardware: the desert, pretty girls, heat, cacti, reptiles and rockin’ out. One stop shopping!” Gibbons shares.

The storyline is a straightforward desert tale: a trio of musicians played by real-life Hardware bandmates Matt Sorum, Austin Hanks and Billy rock out in the desert as a customized ’84 Chevy El Camino pulls up with flaming redheaded Instagram star Ava Marie behind the wheel. She exits the vehicle and is literally moved by the music. Distracted by the action, Harry Reese actually bashed into a Joshua tree (not the town, the plant, yucca brevifolia) more than once with a nasty head gash the result. Thus, blood was added to elements of fire, dust and heat that were the order of the day. There’s also a cameo by an iguana, wrangled by Danielle Wall, better known as High Desert Dani, a local notable whose affinity for reptiles makes her the perfect person to run a rattlesnake rescue service.

Ana Marie’s El Camino is better known as Billy’s Grocery Getter and the star of its own Discovery Channel special. It was customized to Gibbons’ specifications by Jimmy Shine, the most celebrated contemporary hot rod builder on the custom car scene today.