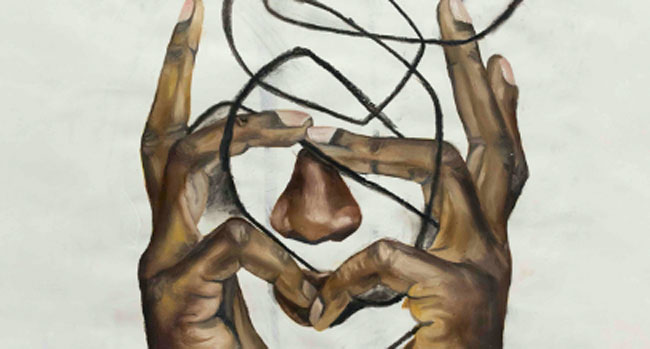 The Roots’ vocalist and MC sets the release for July 31st

Renowned lead singer and legendary MC for GRAMMY Award-winning platinum-certified hip hop luminaries The Roots, Black Thought announces his new EP, Streams of Thought, Vol. 3: Cane and Abel, which will be available at all digital retailers on July 31st. The first single, “Thought Vs Everybody” is set for release on July 10th. It continues the critically acclaimed Streams of Thought series launched by Black Thought.

Once again, Black Thought teamed up with a Black American visual artist for the cover in service of a mission to “elevate hip hop to high art.” This time, he worked with Khari Turner who created a stunning portrait inspired by Black Thought for the album cover. Khari Turner’s work right now is a diary of struggle and overcoming struggle. He explores the history of black defeat, black revolutions and black accomplishments coalescing through mark making, realism and expressionism.

Black Thought’s previously released Streams of Thought, Vol. 1 & Vol. 2 have set the stage for the sequel’s arrival. A tastemaker-approved phenomenon, Pitchfork proclaimed it “a small testament to his sustained excellence” as Rolling Stone, and more offered praise. In addition to bowing in the Top 10 of Billboard’s Top Independent Album charts, “9th vs. Thought” and “Twofifteen” both surpassed one million Spotify streams each.

Streams of Thought, Vol. 2 ushers Black Thought forward as he preps the next installments of his first solo masterpiece, including the upcoming Vol. 3 slated for release soon.

Black Thought — born Tariq Trotter — co-founded legendary Philadelphia hip-hop collective The Roots alongside Ahmir “Questlove” Thompson. Since their formation in 1987, the group has achieved three GRAMMY Awards, sold millions of records, and indelibly impacted the mainstream by way of its longstanding position as the house band on The Tonight Show Starring Jimmy Fallon and successful festival Roots Picnic. An accomplished actor, he emerged as an unforgettable presence on screen in the critically acclaimed Get On Up, HBO’s The Deuce, and more. He has also made countless cameo appearances for everyone from Linkin Park, Damian Marley, and Fall Out Boy to Common, Ghostface Killah, Logic, and more. 2017 saw him set the internet ablaze with a widely touted viral ten minute free-style on Mobb Deep’s “Burn” instrumental, which quickly generated millions of views. Black Thought kicks off a new chapter on Streams of Thought.