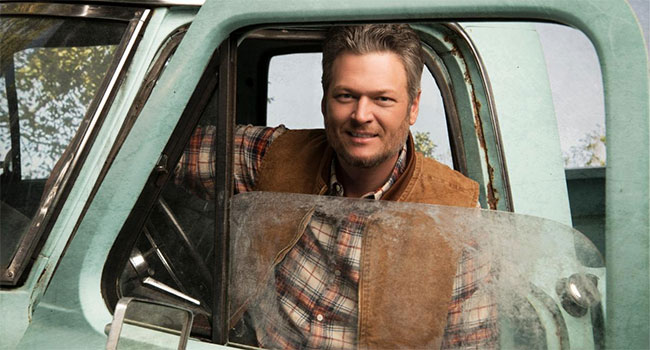 Blake Shelton has been Loaded and Reloaded. Now with Fully Loaded: God’s Country, Shelton is bringing things full circle with both new music and recent hits on his upcoming release out December 13th. The 12 song collection will feature seven hits from previous albums and five new tracks, including the three-time CMA nominated smash, “God’s Country.”

“Well, I knew the label would come up with some plan to release an album,” jokes Shelton. “I’ve been vocal about how much I like this new way of releasing songs more frequently. It keeps me excited and gives me the opportunity to find the hot new song that I love and get it out to the fans quickly. I think they like it too. With five new songs on this album, you’ve got “God’s Country,’ ‘Hell Right’ and a few more that haven’t come out yet – maybe I wasn’t supposed to say that. But the fans will hear most of the music on Fully Loaded before it hits the streets in December.”

Five-time CMA Male Vocalist of the Year Shelton looks to add to his accolades this year with his multiple nominations. “God’s Country,” the fastest country single in the past year to reach one million track equivalents, is nominated for Video, Single and Song of the Year. The smash hit became Shelton’s 26th No. 1 on country radio, where it remained for a multi-week run, in addition to his 16th No. 1 on the Billboard Hot Country Songs chart. The country superstar also earned a Musical Event of the Year nomination for “Dive Bar,” his collaboration with music icon Garth Brooks.

Between putting the finishing touches on Fully Loaded: God’s Country, Shelton has a few select tour dates and is currently filming for the next season of The Voice, which premiered September 23rd. The Grand Ole Opry member also remains focused on his Ole Red partnership with Ryman Hospitality. The newest addition to the collection of restaurant and entertainment venues will open in Orlando next year and joins locations in Tishomingo, Nashville and Gatlinburg.