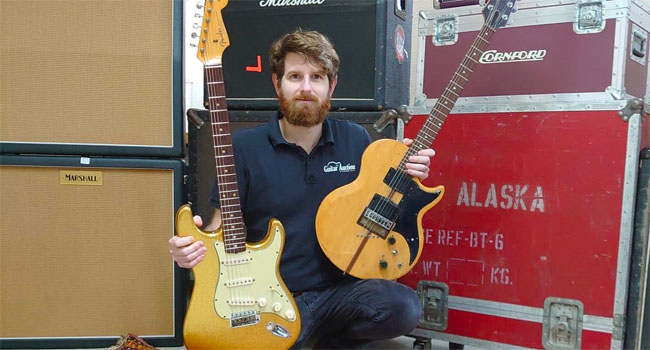 Guitars will be auctioned via Gardiner Houlgate in Wiltshire, UK

Hundreds of guitars, including a Bob Dylan-owned Fender Stratocaster and a Rory Gallagher-owned Gibson L6S go under the hammer at Gardiner Houlgate in Wiltshire, UK next week.

The Dylan owned Fender Stratocaster dating to 1962 has a striking gold sparkle re-finish, that was carried out at the Fender factory in 1991, by then Master Builder J. Black, at Dylan’s request. The guitar has a documented history, initially starting with Cesar Diaz, Dylan’s tech and short time guitarist, who was gifted the instrument, circa 1990. It is thought that Dylan may have used the guitar during his Never Ending Tour. The guitar is offered with a pre-sale estimate of £40,000 – 80,000. Dylan’s iconic Newport Festival Stratocaster sold for a staggering $965k in 2013.

Another guitar of note is a modified 1970s Gibson L6S that was previously owned by Irish Blues-Rock legend Rory Gallagher. The guitar was originally sold by the Gallagher estate through a London dealer in 2012. The guitar comes with a Certificate of Authenticity from the family, accompanied by a photo of Gallagher playing the guitar. It is offered with a pre-sale guide of £8,000 – 12,000.

“It’s another bumper sale, and a thrill to be headed up by a great selection of artist owned guitars,” says Luke Hobbs, auctioneer at Gardiner Houlgate. “Bob Dylan electric guitars are a rarity due to his acoustic roots. Also, to have the opportunity to handle a guitar that was owned by the man that Hendrix once hailed as the greatest guitarist in the world, that being Rory Gallagher, is a real honor.”

Also being sold in this auction is a collection of over 70 lots of backline equipment from the collection of ex Whitesnake guitarist Bernie Marsden. Marshall amplifiers used on tour and on early Whitesnake recordings, including the hit single “Here I go Again” are the highlight, along with a Yamaha drum kit that was owned by the late Cozy Powell.

On the other end of the collectable spectrum is a section of original stage flooring that the Beatles once graced in their early career. The floorboards were recently removed from Lathom Hall, Liverpool, the venue the Beatles played 10 times, starting with their first advertised gig as the Silver Beats. The final performance was George Harrisons 18th birthday, known for the infamous fight between then bassist Stuart Sutcliffe and a few others in attendance, that resulted in John Lennon breaking his finger and Sutcliffe suffering a fractured skull and concussion. This event is believed to have led to Sutcliffe’s death 16 months later.

The auction will take place at Gardiner Houlgate, 9 Leafield Way, Corsham, Wiltshire, SN13 9SW on Wednesday and Thursday, December 9th and 10th starting at 10 am. Over 800 lots go under the hammer including a wide variety of over 400 guitars, guitar amplification, entertainment memorabilia a more.

The sale will be available for public viewing by appointment over Monday and Tuesday, December 7th and 8th from 9 am–5.30 pm each day.