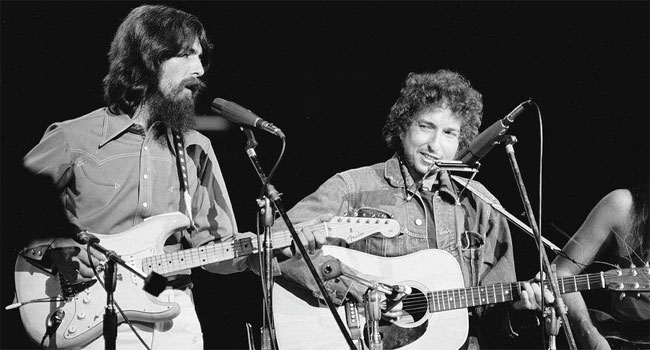 Over the weekend, Bob Dylan surprise released 50th Anniversary Collection 1970 via UK store Badlands. The strictly limited three disc set contains songs cut in 1970, including the secret legendary George Harrison sessions where the pair recorded a variety of tracks together.

Rolling Stone reports that the set was released in Europe as a response to a law that stipulates recordings enter the public domain 50 years after their creation if they aren’t officially released by the copyright holder, which would be Dylan. If not released officially, any bootlegs of these tracks would become legal, sparking a flood of unofficial releases from the singer/songwriter. Dylan has been issuing yearly copyright protection releases since 2012 to avoid these issues.

“This release is strictly limited to one unit per customer,” Badlands shares in the release info. “Extremely limited release. It will sell out instantly.”

No word on how limited the sets are, but they sold out instantly after quietly being put on sale. Collectors will likely be able to find the 3 CD set at Discogs with inflated prices in the future.

The collection features recordings from a secret May 1, 1970 recording session, when the pair jammed on Dylan’s “One Too Many Mornings” and “It Ain’t Me Babe,” as well as The Beatles’ “Yesterday,” and other tracks from Dylan’s 11th studio album, New Morning. The tracks circulated as bootlegs, but likely at lesser quality than now.

The sessions sparked outrage at the time as The Beatles had just disbanded. Harrison was seen as betraying the band by recording with a folk artist.

Rolling Stone notes that Dylan’s Greatest Hits Volume 2 will likely receive the same treatment upon its 50th anniversary in 2021. Every vault recording from Dylan’s Before the Flood Tour with The Band in 1974 will likely be released in 2024 to avoid the same issue.