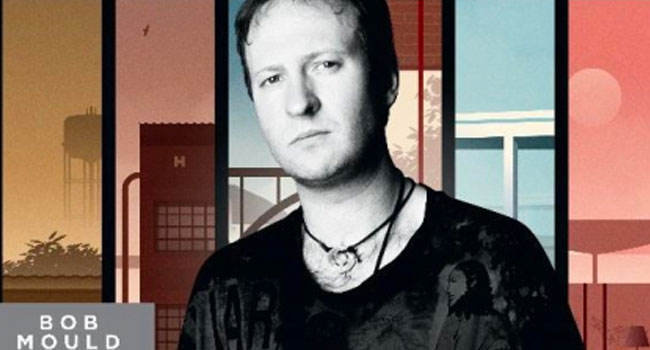 On October 2nd, Demon Music Group will release Distortion: 1989-2019, a chronicle of the solo career of Bob Mould and his band Sugar. This massive anthology compiles for the first time the entirety of Mould’s recorded work from 1989 onwards: 18 studio albums, plus four live albums and two albums of rarities and collaborations. Assembled with Bob Mould’s full involvement and featuring new sleeve notes from legendary UK music critic Keith Cameron plus exclusive new artwork, this is the definitive portrayal of an American rock icon.

“It’s called Distortion because it describes the music and it fits the world we live in,” says Mould himself. “In this new age, everybody shares their life in real time. But I’m not done yet. If I didn’t have a constantly active career, this anthology might feel like the proverbial dirt landing on top of my coffin — though somehow I seem to be able to crawl my way out of the dirt every time!”

The news comes accompanied by audio and video of Mould performing ‘Could You Be the One?’ – a latter Hüsker Dü classic, drawn from the trio’s 1987 swan song Warehouse: Songs and Stories – at Washington D.C.‘s 9:30 Club in October 2005, in the process bringing it back to dynamic, electric life. It features on the CD anthology’s Distortion Plus: 1989-2019 rarities and collaborations discs alongside other highlights from the show.

“For years, I didn’t play Hüsker Dü material with my subsequent touring bands,” Mould shares of the show. “This was the first time my longtime friend and colleague Jason Narducy (bass) played in my touring band. Rich Morel (keys) was my work partner for 11 years in Blowoff, and the 9:30 Club was home for our monthly dance party. Brendan Canty (drums) nudged me out of my self-imposed ‘rock retirement’ after the 1998 Last Dog and Pony Show tour (which is also chronicled in the box set). Brendan’s company Trixie Productions filmed and edited the show.”

As Mould’s musical trajectory enters its fifth decade, now is the perfect moment to reflect on the journey so far. Distortion’s 24 CD box set edition features 295 tracks, mastered by Jeff Lipton and Maria Rice at Peerless Mastering in Boston, and includes every solo album from 1989’s Workbook to 2019’s Sunshine Rock, the entire Sugar catalogue, Mould’s long out-of-print electronica projects LoudBomb and Blowoff, and four live albums spanning the period 1989-2008. Also included is Distortion Plus: 1989-2019, a new and exclusive collection of rarities and collaborations, featuring such highlights as “Dear Rosemary,” Mould’s 2011 collaboration with Foo Fighters, his fabled Golden Palominos contribution “Dying From The Inside Out,” plus a previously unreleased demo version of “Dog On Fire,” his theme tune for Comedy Central’s The Daily Show.

Beautiful new artwork has been created by illustrator Simon Marchner, while the 72-page booklet features sleeve notes by Cameron, new interviews with Bob, a foreword by writer and actor Fred Armisen, testimonials by Richard Thompson, Shirley Manson and Best Coast’s Bethany Cosentino, plus lyrics and unseen memorabilia. One thousand limited edition sets include an exclusive print hand-signed by Mould himself.

Also released on October 2nd is the first in a series of four vinyl box sets spanning the same 30-year period. Distortion: 1989-1995 contains eight LPs, beginning with Workbook through to the final Sugar studio album File Under: Easy Listening, plus Besides, Sugar’s compilation of B-sides and non-album tracks and Distortion Plus: 1989-1995 a new and exclusive collection of rarities and collaborations. Each album is mastered by Jeff Lipton and Maria Rice and features new Simon Marchner artwork; the 28-page companion booklet features new sleeve notes plus lyrics and memorabilia, while a 750 limited edition includes a 12”x12” screen print of the new Copper Blue artwork, hand-signed by Marchner and Mould.

Truly then, this is the definitive guide through the career of one of the most storied, creative and consistent voices in the American underground.

“In 1989, Bob Mould was already a renowned figure, thanks to his trailblazing work with Hüsker Dü: the Minneapolis trio which refracted ’60s pop melody through the discord of hardcore punk, creating a new language that Pixies and Nirvana would subsequently teach the world to sing,” Cameron offers. “With his debut solo album Workbook, however, Bob Mould amazed his audience with its pastoral beauty and contemplative tone.

“It would be the first in an ongoing series of artistic transformations, each profoundly shaped by Mould’s sensitivity to his environment. In 1992, he formed Sugar, a band whose debut album Copper Blue earned both critical plaudits and a long overdue popular dividend. Just three years later, with Sugar at its commercial peak, Mould ended the band and made a self-titled solo record mapping the most nakedly personal path down a road already hallmarked by unsparing self-expression. He shocked then confounded fans by announcing his retirement from rock music in 1998 and re-emerging in the new century as an experimental electronica artist and successful DJ, whose club night Blowoff became a phenomenon across the US. By the end of the ’00s, Mould had found a harmonious accommodation between his musical selves, and in 2012 released the catalytic Silver Age, made with his latest power trio configuration, and heralding a resurgent decade. A succession of albums up to 2019’s Sunshine Rock followed, each one a real time/real life distillation of fearless artistic vision and a master craftsman’s skill.”