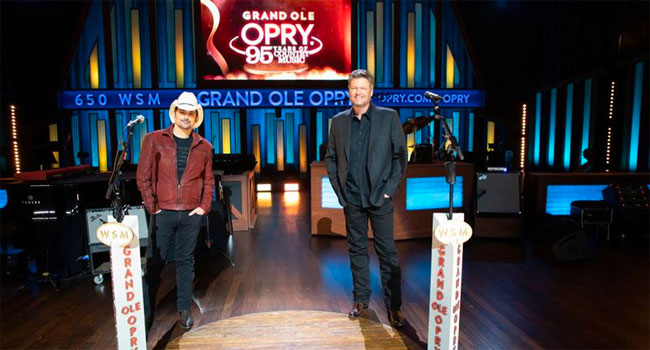 Grand Ole Opry members Brad Paisley and Blake Shelton will serve as co-hosts for Grand Ole Opry: 95 Years of Country Music, honoring the iconic Nashville show and the incredible country stars that call it home. The two-hour special is set to air Sunday, February 14th at 9 pm ET/PT on NBC. Later that same week, Paisley will celebrate his 20th anniversary as a Grand Ole Opry member. Shelton is marking 10 years as a member.

For almost a century, the Grand Ole Opry has celebrated the past, present and future of country music, showcasing a mix of country legends and the contemporary chart-toppers who have followed in their footsteps. In that same spirit, the anniversary special brings together artists from across generations who share a passion and reverence for the Opry. With country music stars not only performing their biggest hits, but also covering classics from some of the Opry’s most famous members, it will be an unforgettable night of music. In addition to the incredible performances, the Opry will open its archives that span a period of over nine decades and include interviews, performances and appearances by country artists in all stages of their careers.

Last fall, the Opry re-opened its doors to a limited capacity audience for its official 95th birthday show. When the Opry closed its doors to audiences in March, it returned to its original format as a live Saturday night broadcast without a live audience. It’s invited a world wind of guests, including Reba, Vince Gill, Garth Brooks, Trisha Yearwood and more. Fans around the world can still tune in to the Saturday broadcasts via circleplus.com, or listen on radio at opry.com and wsmonline.com, via the Opry and WSM mobile apps and on its flagship radio home, 650 AM WSM.