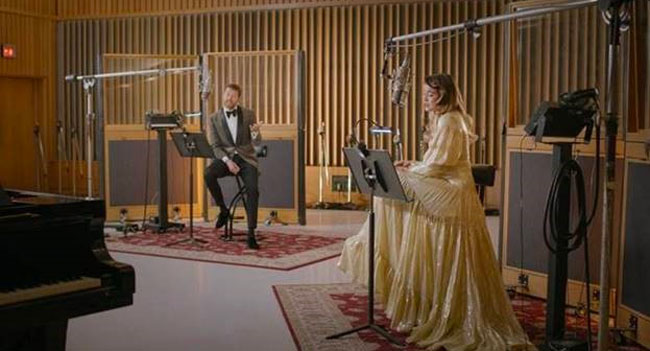 Brett Eldredge’s voice has become a staple of the holiday season and this year is no different. This year, the acclaimed vocalist is giving fans a brand new duet version of “Baby, It’s Cold Outside” featuring award-winning Mexican singer-songwriter and actress Sofía Reyes. The official music video features Eldredge and Reyes recording the track at the historic Capitol Studio in LA. It is the same studio where Frank Sinatra, one of Eldredge’s biggest influences for his critically-lauded holiday album Glow, recorded many albums as well.

“I love Sofía’s voice and I’ve always wanted to learn some Spanish,” admits Eldredge. “And who better to learn from than her?” Reyes added, “I’m so happy to work with Brett. It’s an honor and I think you’ll love the Spanish version of this song.”

Eldredge is also set to join star-studded lineups for several upcoming holidays specials, kicking off the festive season with ABC’s The Wonderful World of Disney: Magical Holiday Celebration airing Thanksgiving night at 9 pm ET/PT. Fans will also get a chance to see Eldredge perform for NBC’s iconic Christmas In Rockefeller Center on Wednesday (Dec 2nd) at 9 pm ET/PT and again on Thursday (Dec 10th) for their “One Night Only: The Best of Broadway,” an unforgettable night of music celebrating the incredible and resilient Broadway community hosted by Tony Award-nominated Tina Fey.

His latest album, Sunday Drive, debuted earlier this year as the top-selling country album week of release and marked Eldredge’s fifth Top 5 on the Top Country Albums chart. Produced by Tashian and fellow GRAMMY-winning producer Ian Fitchuk, the album continues to bring in critical praise with Billboard naming it “his most compelling set yet, full of musical diversity and heart.” People describes the album as “bounding anthems and expansive ballads not meant for indoor listening,” while The Tennessean calls it “a creative rebirth for one of modern country’s most soulful vocalists,” placing it on Nashville’s Best Music of 2020, So Far list. Eldredge has already brought live takes of the tracks to morning and late night shows alike, including Good Morning America, Live with Kelly and Ryan, Late Night with Stephen Colbert and more.