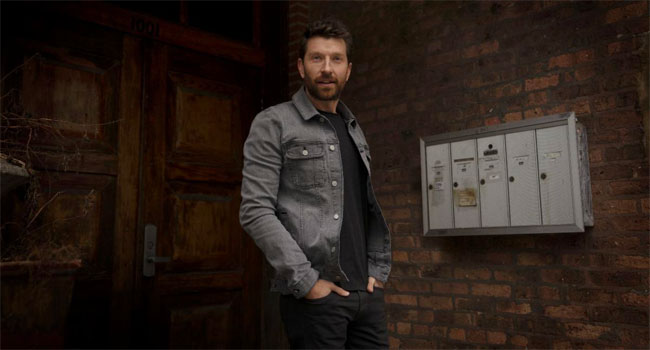 Album was released on July 10th

It wasn’t just swapping his iPhone for a flip phone. Before creating Sunday Drive, Brett Eldredge unplugged emotionally as well, taking his own version of a Sunday Drive to reconnect with who he was at the start of his journey. With its organic focus on sound and lyrics, Eldredge’s newest record is attracting early success. Sunday Drive arrives this week as the top selling country album, and it marks his fifth Top 5 on the Top Country Albums chart. GRAMMY-winning producers Daniel Tashian and Ian Fitchuk joined Eldredge to create what The Tennessean calls “a creative rebirth for one of modern country’s most soulful vocalists.”

Following album launch, Eldredge is committed to continuing the exploration of his heart. Last week he offered the world a raw look into his life and musical journey through Sunday Drive (The Documentary). Viewers travel with the singer/songwriter from Nashville to his hometown of Paris, Illinois and then to Chicago, where he recorded the album. Directed by PJ Brown, the documentary features the friends, family, team members and collaborators who have made Eldredge the artist he is today.

“As [my manager John] and I dove into this whole deeper side of who I am as an artist, you know, who I am as a person makes me who I am as that artist,” Eldredge shares. “To really go this far into showing that… it’s authentic, I think, in a world that sometimes lacks authenticity. Even in my own life, to come back and find that and to show it to others… that’s something that is gold.”

Eldredge’s introspection still allows him to be the fun-loving artist his fans know and love. He celebrated album launch with a virtual visit to Good Morning America on July 13th, where her performed the optimistic “Good Day.” The acclaimed vocalist performed a stripped-down version of his current single “Gabrielle” earlier this year on Late Night with Stephen Colbert. “Gabrielle” – a song that Rolling Stone declared “a breath of fresh air” – continues to hit airwaves around the nation. Eldredge recently premiered the song’s official music video, directed by Reid Long and shot, as glimpsed in the documentary, in the gymnasium of his alma mater.