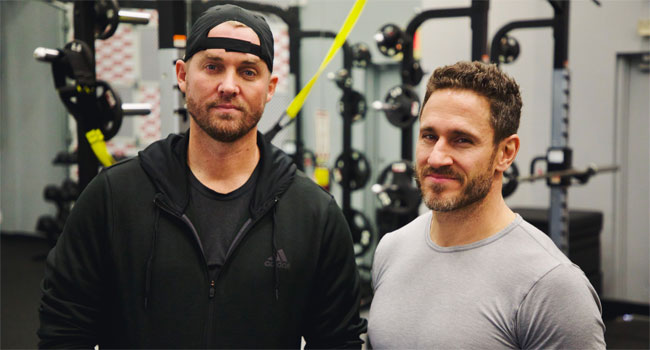 Brett Young is kickstarting the New Year with the January 25th launch of “BY40 Challenge,” a 10-week fitness program with celebrity trainer Don Saladino (Blake Lively, Ryan Reynolds, Jake Gyllenhaal, John Krasinski, Emily Blunt). No stranger to a committed regimen as a former NCAA scholarship athlete, Young teamed up with Saladino to meet his goals in advance of his milestone 40th birthday in March. Designed to be interactive and simple to follow for all levels, Young is inviting fans to sweat is out with him and earn prizes for the challenges completed along the way. With over 25 prizes to claim from Garden of Life, Trifecta Organic Meal Delivery, On Running Shoes and Halo Sport, other prizes include a Zoom call with Brett, tickets/M&G for a future show, personal training sessions with Don and much more.

“As my 40th birthday approaches, I knew I wanted to make a personal decision to be in the best health I could be in for myself and my family,” Young explains. “Sometimes that’s easier said than done, so I feel lucky to have teamed up with Don Saladino, who is the absolute best in the business and helped make the program so fresh and creative. I saved the best for last. I’m inviting all of you to join me on this journey and I’m so excited to see what we can accomplish together!”

Young has captured the hearts of fans everywhere through his honest lyrics and West Coast-meets-Southern sound, aptly dubbed “Caliville” style. His latest Top 20-and-rising single, “Lady,” is a heart-bending love letter to his daughter and wife written with Ross Copperman and Jon Nite shortly before Presley’s birth in October 2019. While touring is paused, Young has been tapped for several high-profile, all-genre livestreams in an effort to bring music and relief to fans across the world – Live at The Ryman, Levi’s 5:01 Music Series, Visible’s Red Rocks Unpaused, Pepsi’s Unmute Your Voice Concert and Camping World’s Taking The Highways Across America series.

Young’s gold-certified Ticket to L.A. (BMLG Records), debuted atop the Billboard Country Albums chart upon release and features back-to-back No. 1 hits he co-wrote — “Catch” and “Here Tonight.” His sophomore effort follows a PLATINUM self-titled debut, which dominated the Top 20 on the Country Albums chart for 37 weeks. Young’s six consecutive chart-toppers – “In Case You Didn’t Know” (5X platinum), “Mercy” (3X platinum), “Sleep Without You” (platinum), “Like I Loved You” (platinum), “Here Tonight” (platinum) and “Catch” (gold) – have contributed to over 4.5 billion streams globally. He was named ASCAP’s 2018 Country Songwriter-Artist of the Year for his “melodic craftsmanship” (Billboard) and has also garnered nominations from ACM, Billboard, Teen Choice, CMT and CMA Awards as he continues to rack up nonstop hits as “one of country’s most consistent radio stars” (Rolling Stone).