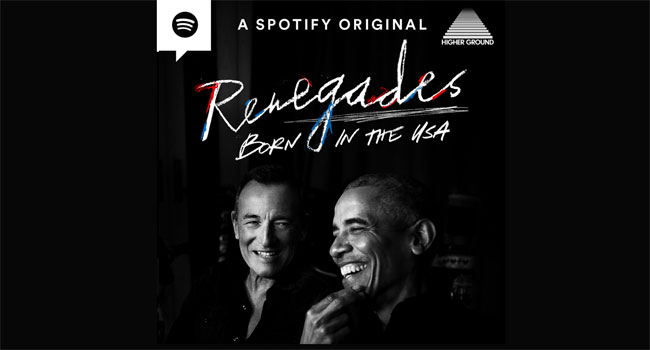 Renegades: Born in the USA is available now

Bruce Springsteen and President Barack Obama have teamed to for a Spotify podcast series detailing their personal and intimate conversations in Renegades: Born in the USA. The eight-episode series was announced Monday (Feb 22nd) during Spotify’s Stream On event and is the second podcast to launch through Spotify’s partnership with President Obama and Michelle Obama’s Higher Ground. Over the course of the season, President Obama and Springsteen will explore topics of race, fatherhood, marriage, and the future of America.

Dollar Shave Club and Comcast will serve as the first season’s presenting sponsors in the United States.

The longtime friends, who first met in 2008, discuss their hometowns and role models, explore modern manhood, and confront the painfully divided state of the country today — and offer a vision of how we can all move forward together.

President Barack Obama asks in the introduction of the first episode of the podcast: “How did we get here? How could we find our way back to a more unifying American story?”

He then goes on to explain: “That topic came to dominate so many of my conversations last year — with Michelle, with my daughters and with friends. And one of the friends just happened to be Mr. Bruce Springsteen. On the surface, Bruce and I don’t have a lot in common. But over the years, what we’ve found is that we’ve got a shared sensibility. About work, about family and about America. In our own ways, Bruce and I have been on parallel journeys trying to understand this country that’s given us both so much. Trying to chronicle the stories of its people. Looking for a way to connect our own individual searches for meaning and truth and community with the larger story of America.”

The first two episodes are available exclusively to the hundreds of millions of Free and Premium Spotify users around the world now.