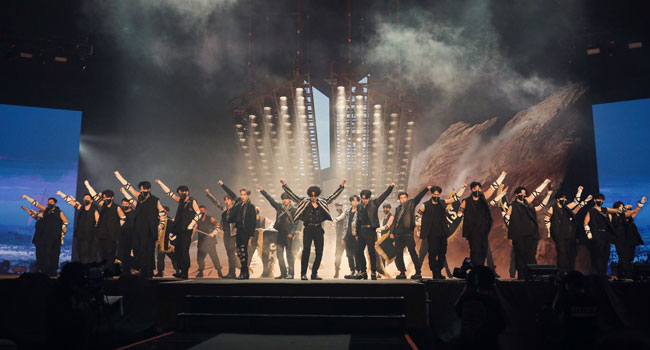 The grandiose BTS virtual concert MAP OF THE SOUL ON:E has connected 993,000 viewers from 191 countries/regions. The two-day show over the last weekend on October 10 and 11 in Seoul delivered a total of 23 performances, and for the first time ever, viewers could watch the stages of the b-side tracks of the K-Pop superstars’ Map of the Soul: 7.

The group used a number of cutting edge technologies including AR and XR to amplify the visual experience and bring a more intimate live interaction between the pop act and spectators. The show also marks the world’s first streaming concert that applied both multi-view and 4K/HD which enabled fans to choose their favorite screen out of the six multi view displays in either 4K or HD across four massive stages.

“For the Map of the Soul album series and this show, we focused on putting our thoughts, personal stories and songs of the past seven years and prepared really hard,” the group shares during the livestream.

The show further drew BTS and fans closer together – fans were displayed on LED screens and their fervent cheer sounds could be heard in the venue, all in real-time. BTS expressed their joy by saying “we are happy to see you, even if it’s through a screen. It’s invigorating to hear your voices in such a long time. They are the most beautiful sound on earth.”

Dedicating the encore entirely to ARMY, they gave variations across the two days; on the first day performing “Butterfly” and “RUN” and on the second day “Spring Day” and “IDOL.”

After a year of preparation, MAP OF THE SOUL ON:E arrived with exclusive and spectacular stages. The show brought never-before-seen performances as well as altered set lists each day for fans who must have felt disappointed by the cancellation of their tour due to COVID-19. The exciting news of the virtual concert arrives on the heels of BTS’ announcement of their new album BE (Deluxe Edition) slated for release on November 20.

The K-Pop superstars continue to break records as they top the Billboard Hot 100 chart for the fifth time with their record shattering single “Dynamite,” since regaining it for a third non-consecutive week in late September. BTS secures their place as the new face of pop with their return to No. 1 on Billboard’s Hot 100 chart as they break their tie with Megan Thee Stallion for the most weeks at No. 1 on Billboard’s Digital Song Sales in 2020, when factoring the success of “On” from earlier this year.