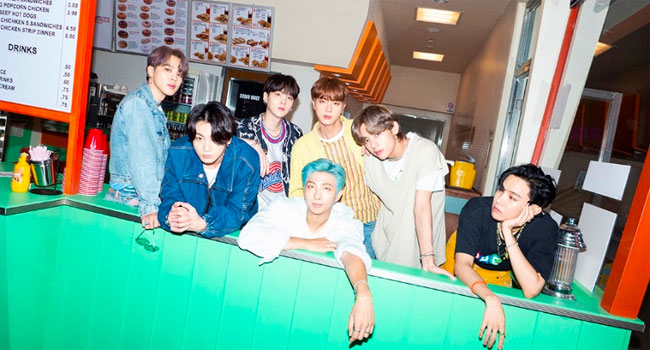 “Dynamite” has made history for the K-pop superstars

Global superstars BTS continue to make history as their mega-hit “Dynamite” spends a second consecutive week at No. 1 on Billboard’s Hot 100 songs chart. Last week “Dynamite” debuted at No. 1, which is not only an all time high for the band, but makes them the first Korean pop act to top the Hot 100 chart.

“Dynamite” remains at No. 1 on this week’s Hot 100 chart with 17.5 million U.S. streams and 182,000 downloads sold in the week ending September 3rd, according to Nielsen Music/MRC Data. “Dynamite” is the 20th of 43 songs that have entered the Hot 100 at No. 1 all-time to remain on top during its second week, according to Billboard.

BTS has been shattering record after record with their latest single “Dynamite” performed fully in English. The music video reached new heights on YouTube, amassing 101.1 million views within 24 hours after its release and garnering over three million peak concurrent viewers immediately upon release. The song has also topped the iTunes charts in 104 regions, and Spotify’s “Global Top 50” chart, the very first for a Korean act. They recently performed “Dynamite” for the first time at the MTV Video Music Awards, where they won all four categories they were nominated for: Best Pop, Best Group, Best K-Pop and Best Choreography.

“Dynamite” is the first taste of what’s to come from the band’s forthcoming studio album, set for later this year. A release date has yet to be announced via its label, Big Hit Entertainment. The group celebrated the No. 1 feat with a virtual press conference last week.

BTS’s fourth film, Break The Silence: The Movie, was set to be released in limited theaters beginning September 10th in Korea, but has been postponed due to the latest COVID-19 outbreak in Seoul. A new Korean premiere date will be announced by the end of September once the situation is more stabilized. Additional screenings begin September 24th with dates varying per territory and subject to change based on the status of local cinema re-openings due to the pandemic.