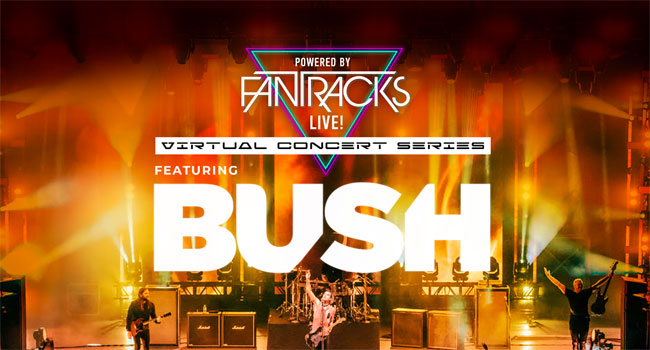 FanTracks, the new live streaming and fan engagement platform, is hosting its first concert with storied multi-platinum British hard rock group Bush on Saturday, July 18th starting at 9 pm ET/6 pm PT. The band will play a 70-minute set in a professional studio to celebrate their first album release in two years, The Kingdom. It will give devoted fans a chance to hear the music they love online in sonic 360 sound and interact with the musicians — for free. Fans can pre-register for show via FanTracks.

“We are thrilled to have Bush as the very first band to offer their fans the FanTracks immersive experience,” says FanTracks co-founder Barry Summers. “Nothing compares to that direct interaction with a great performer, and we feel FanTracks will ignite these connections, giving fans the same excitement they’d feel with a live show–but with a few extra opportunities to enhance that excitement thrown in.”

During the show, hosted by longtime DJ, TV host, and music industry veteran Matt Pinfield, virtual fans will have their choice of multiple camera angles using the Director’s Chair feature, use the four channel audio mixer to home in on their favorite parts of the performance, and even enjoy immersive AR experiences.

Outside of the music itself, other fan opportunities include multiple pre-show channels with premium content, special merch deals, and signings. Using FanTracks, fans can dive deeper into a group’s history and artistic vision thanks to a post-show Q&A with the members of Bush. There are ample chances to hang out with fellow fans virtually and to buy albums or apparel.

“We are so excited to be able to perform live for our fans during these difficult times,” says Gavin Rossdale of Bush. “Partnering with FanTracks will allow us to bring music from our new album to life, in an immersive audio visual experience unlike ever seen before”

“We’re partnering with high-level artists like Bush to create a new way to enjoy music performance, one that benefits and inspires artists while exciting fans by delivering a new level of immersive visuals, master quality audio show for the at-home audience” explains Ty Roberts, FanTracks co-founder. “We’re moving artists from the kitchen casting back onto a high tech LED stage where can create a transportive experience for their fans,” We think these experiences are worth paying for and we hope fans agree as this would turn livestreaming into a sustainable option for artists.”

FanTracks was founded by Barry Summers, award-winning live concert tv producer, and Ty Roberts, former CTO of Universal Music and co-founder of Gracenote. A departure from models that digitally mimic traditional ticketing approaches, the platform offers music lovers access to high-quality, carefully curated, and professionally produced live shows as part of a low-fee subscription, sharing the revenue with artists. Its proprietary technology creates a new world of virtual music and fan experiences, from a range of group chat modes, to hosted “hang out” spaces and parties, to interactive features that bring musicians and music lovers together. FanTracks will be announcing more artists in the coming weeks.