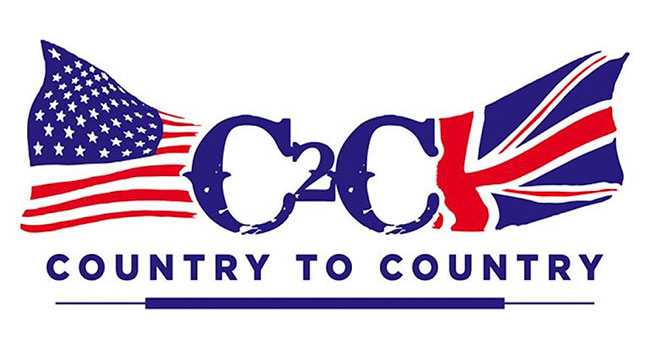 The C2C: Country to Country Festival in London, Dublin and Glasgow has been postponed due to the coronavirus outbreak. The European festival was supposed to see Eric Church, Luke Combs and Darius Rucker headline the March 13-15th tri-country event with support from a variety of country acts. However, organizers shared the event is currently being rescheduled.

“Due to the global pandemic of COVID-19 and the changing nature of travel policies in other countries alongside possible extended future restrictions, it is with regret that Country to Country Festival 2020 – London, Dublin and Glasgow – is being postponed,” they write.

“Ticket holders are advised to hold onto their tickets. More information will be announced in the coming days on the rescheduled event.”

Early on Thursday (March 12th), organizers shared that the CMA Songwriters Series was canceled due to the pandemic. “Due to the US travel restrictions announced overnight, we regret to announce that this evening’s CMA Songwriters Series show at indigo at The O2 has been cancelled. A refund will be automatically processed to the card used to purchase your tickets.”

“We are so sorry to disappoint our fans overseas; however, with the growing uncertainty and unpredictable nature of the virus that is spreading throughout the world, the safety and security of our entire team is the top priority,” they share on social media. “We are forever grateful for every opportunity we get to witness just how far our music is reaching, and we will be back across the world as soon as we can. Much love and thank you for your support.”

The C2C Festival is among the hundreds of events being canceled after the World Health Organization (WHO) declared the coronavirus a worldwide pandemic. More than 125,000 cases have been reported in 110 countries with nearly 5000 deaths. However, nearly 70k people have contracted and survived the virus that was discovered last year.

Other festivals and events that have already made announcements include the Houston Livestock Show and Rodeo to shutting down 11 days early because of public health concerns, SXSW in Austin and the Ultra Festival in Miami. Promoters Goldenvoice Entertainment announced earlier this week that Coachella and Stagecoach have been pushed back six months to October 2020 due to the coronavirus outbreak. The Tin Pan South Songwriters Festival in Nashville has also been rescheduled “in light of the tornado this week as well as growing health concerns over the coronavirus.”

Live Nation is also postponing all domestic and international tours through the month of March. They’re hoping to restart the touring season in May or April.

Many acts, including Kenny Chesney, Chris Stapleton, The Who, Pearl Jam, Dan + Shay, Sammy Hagar, Santana, Sons of Apollo, Zac Brown Band, Slipknot and others, had canceled or postponed spring shows due to the outbreak before Live Nation’s announcement.