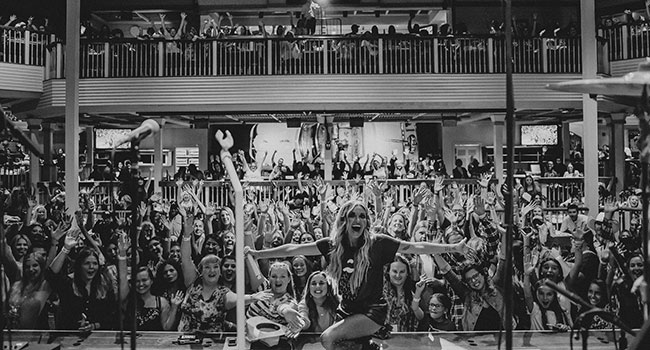 Carly Pearce had the crowd singing all night long as she launched her fall tour at Buck Owens Crystal Palace in Bakersfield on Thursday (Oct 17th). The sold out crowd was on its feet all night as the newly married star mixed hits with covers and new tracks that are sure to be hits!

“This is night one of my tour this fall. This is pretty awesome because this is the first show of my tour and ya’ll just go and sell it out,” Pearce shares from the stage.

Much of the setlist was comprised of tracks from her 2017 debut Every Little Thing and covers, including a rowdy rendition of Garth Brooks’ “Ain’t Goin’ Down (‘Til The Sun Comes Up)” early in the show. Dressed in leather shorts and a Rolling Stones tee, Pearce strutted onto the stage as the intro to “Careless” played. One after one, she ripped into the next song while smiling and waving at the crowd.

Other covers include a “90’s Medley” featuring snippets of Shania Twain’s “Whose Bed Have Your Boots Been Under?,” Faith Hill’s “Breathe,” The Dixie Chicks’ “Cowboy Take Me Away” and LeAnn Rimes’ “Blue.” The crowd loved her spin on these 90’s country classics. She didn’t perform Dolly Parton’s “9 To 5” as she has in previous shows, but I’m glad I saw her do an acoustic rendition during the KUZZ Class of 2019 show six months ago.

Pearce performed several new tracks including “Closer To You,” which she released late last year and is the first taste of new music from her upcoming sophomore album. “I know when my next record is coming out, but I can’t tell you yet, but it’s so soon,” she states.

She invited opener Ryan Griffin back to the stage to sing Lee Brice’s part on their new duet “I Hope You’re Happy Now.” If Griffin doesn’t sound familiar, he will real soon. The Florida native is signed to Warner Music Nashville and is a co-writer on Kelsea Ballerini’s hit “Dibs.” His debut single is expected to ship to country radio soon and has a nice career ahead of him.

I enjoyed the entire show, but my favorite song of the night was a new ballad called “It Won’t Always Be Like This.” The song is so poignant and hits close to home. It’s about revisiting her hometown that she couldn’t wait to leave, something I can fully relate to. Pearce dropped out of school at age 16 to move to Pigeon Forge, TN where she performed at Dollywood. She later moved to Nashville where it took her about ten years to finally secure a record deal and accomplish the success she now has, including being nominated for “Female Vocalist of the Year” at the CMA Awards. I hope she plans to release it as a single. It could be her next No. 1 and was a stone cold country song.

Pearce closed the night out with three “life-changers,” as she calls them: “If My Name Was Whiskey,” “Every Little Thing” and “Hide The Wine.” “If My Name Was Whiskey” wasn’t released to country radio, but is a fan favorite. She wrote the song in forty-five minutes and modeled it after her classic country influences she had covered earlier in the night.

Her smash breakout “Every Little Thing” broke records as the highest charting solo female debut since July 2015, and one of only three to accomplish the feat in 12 years. The lyrics were comprised following a bad breakup. “Bakersfield, thank you for showing me that some things that really suck are the best things that can happen to you!” she states to loud applause. She stopped singing a few times to take in the crowd knowing every word of the chorus.

Pearce thanked the fans throughout the night for their support. She often posed for pics from the stage as fans were taking selfies — my daughter included. She eagerly signed a dozen or more autographs as well, including cowboy hats, boots and concert shirts while performing (I bought my daughter a second shirt she could wear so she can frame the signed one). Pearce commemorated the night by having her photographer, Chris Ashlee, take the pic featured in this article of her with the sold out crowd behind. Look for me in the front row!

Pearce is a great singer and songwriter and has a long career ahead of her. I loved her performance and how much she interacted with the crowd. She and her band were spot on and polished. I’m so glad I got to introduce my daughter to her music at this show. She and I are both big fans and can’t wait for album number two to drop (soon). Pearce is as authentic as authenticity can get. She’s a true country woman who hasn’t forgotten her roots and I can’t wait to see what she does next!