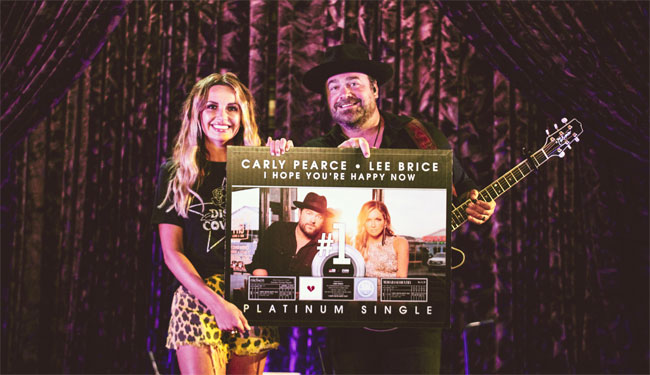 As tour dates are paused, Carly Pearce and Lee Brice fans still find comfort and excitement in their music. During last night’s (Wed, July 1st) CMA Summer Stay-Cay presented by Budweiser Nitro Gold virtual celebration, the powerhouse duet partners, Brice and Carly Pearce, were presented with a plaque cementing platinum status for their No. 1 hit “I Hope You’re Happy Now.” CMA CEO Sarah Trahern was on-hand to present the honor. The pair performed their smash collaboration, which has surpassed 225+ million global streams and is featured on Pearce’s self-titled sophomore album via Big Machine Records. The track was penned by Pearce alongside Luke Combs, Jonathan Singleton and Randy Montana.

“I knew when I heard the song for the first time that this was something special and I’m honored that Carly asked me to be a part of it,” says Brice. “Thank you to all the fans for loving this song as much as Carly and I did recording it and making this a platinum hit.”

“Having songs that meant something to people was always my dream,” expresses Pearce. “To see these songs reach such big milestones and see that my music is making an impact on people’s lives is more than I could’ve ever hoped for. I will never take any of this for granted and am so thankful.”

Pearce was also awarded a gold plaque for her single “Hide The Wine.”

In the variety show style livestream, Pearce also competed in Super Easy Trivia with Bobby Bones and performed The Chicks’ “Cowboy Take Me Away.” During the ‘90s Country Cover Challenge with Russell Dickerson, Pearce offered a tender version of Patty Loveless’ iconic “You Don’t Even Know Who I Am.”

During the multi-hour livestream, Brice also performed his song, “Hey World,” which is a stripped-down piano ballad that is a reflection of the emotional toll that the current health crisis has taken. He recently performed “Hey World” on the TODAY Show for their Artist Lounge: At Home Series.