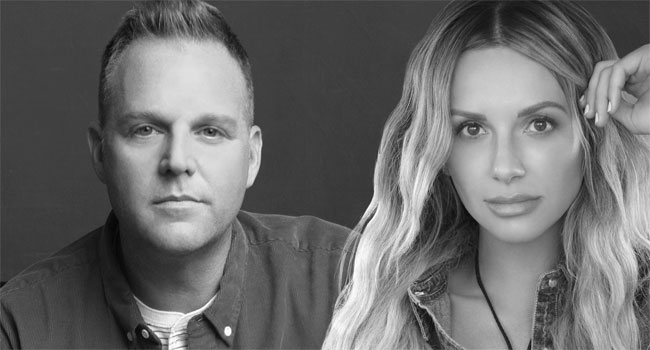 Five-time GRAMMY nominated singer/songwriter Matthew West and chart-topping CMA Awards winner and three-time ACM Awards nominee Carly Pearce partner for a duet version of his No. 1 radio single, “Truth Be Told” that is available everywhere. Spending four weeks at the top of the radio charts, the single was originally from West’s 2020 album, Brand New, and touches the important topic of authenticity, honesty and vulnerability.

“I’m honored to have Carly join me on this new version of ‘Truth Be Told,'” West shares. “Since her first single, ‘Every Little Thing,’ I’ve been a huge fan. There’s an honesty in her voice that convinces you she’s not just singing, she’s feeling every word she’s singing. It was a special thing to hear that same honest vocal delivery brought to this song about being honest. I’m so excited for the world to hear this duet.”

In addition to the single, the in-studio video of the recording debuts. Fans can get an extra glimpse into West and Pearce as he interviews her on next week’s podcast episode on The Matthew West Podcast.

“My faith is such a huge part of my life,” Pearce says. “I’ve been praying for the right opportunity to show more of my heart, and ‘Truth Be Told’ felt meant to be. Not only am I such a fan of Matthew’s, this lyric has been the anthem of my life over the last year. Being transparent and vulnerable is how we connect with others. I’m so excited to be a part of this collaboration!”

West is a five-time GRAMMY nominee, a multiple ASCAP Christian Music Songwriter/Artist of the Year winner, and a 2018 Dove Award Songwriter of the Year (Artist) recipient and has two RIAA gold certified and a RIAA platinum-certified singles. He was also nominated for a GRAMMY Award in 2019 for Casting Crowns’ song, “Only Jesus,” as a songwriter. West also co-wrote Jeremy Camp’s multi-week No. 1 song, “Keep Me In The Moment.”

Last month, Pearce released 29, a seven song EP featuring more traditional instrumentation inspired by her female heroes such as Patty Loveless, Reba and Dolly Parton. The set includes lead single “Next Girl,” the multi-generational tumble “Should’ve Known Better,” the soul slink “Liability” and the slow build homage to her late producer Busbee “Show Me Around,” giving shape to the seven songs that compromise the next chapter for the singer/songwriter.