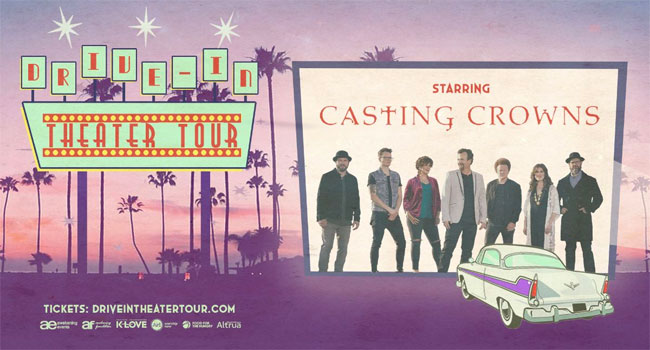 “When we began discussing the Drive-In Theater series and which artists made the most sense, Casting Crowns was an immediate YES,” statesDan Fife, President and Founder of Awakening Events. “We’ve had a long history of successful shows with Casting Crowns. The powerful way in which their music impacts people is something that is needed in this season. I’m honored that the Casting Crowns’ team has decided to join us on this exciting new journey, taking live music to the people, on the Drive-In Theater Tour Series.”

“We are excited for the opportunity to get out and play some shows in a safe environment,” says Mark Hall, lead vocalist of Casting Crowns. “I think on a lot of levels families need this right now. We pray these nights will offer people hope.”

All dates on the Drive-In Theater Tour will comply with local guidelines related to COVID-19.

“We’ve heard the demands from our fans, and we’re working hard to bring live music back to as many locations as possible,” shares Curtis Pinkerton, director of Marketing at Awakening Events. “We’re excited today to be able to safely add seven additional states to the Drive-In Theater Tour Series footprint.”

Tickets for the tour will again be sold by the car load (up to six people per car) and will be available for purchase at noon EDT on June 19th.

Full dates can be seen at driveintheatertour.com.