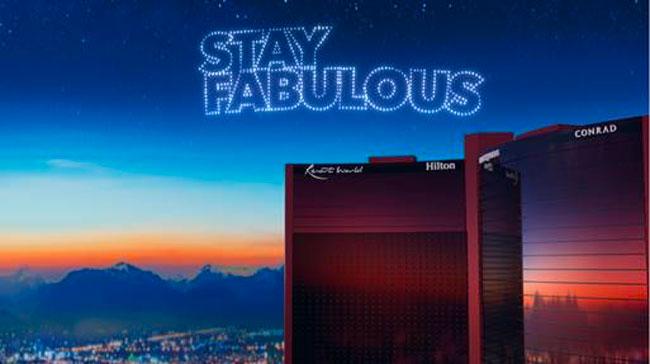 A short film reveals superstar entertainment ahead of June opening

The commercial takes viewers on a larger-than-life journey into the future of hospitality, entertainment and gaming with a series of highly dynamic, captivating vignettes that affirm Resorts World Las Vegas as the new hospitality leader for every form of excitement and spectacle that makes Las Vegas fabulous.

“The concept of Stay Fabulous captures the essence of the Resorts World Las Vegas brand where guests are encouraged to embrace their individuality and create their own version of fabulous,” says Scott Sibella, president of Resorts World Las Vegas. “With stunning visuals and special appearances from A-list entertainers, the commercial gives a peek into the incredible experiences that await when our doors open this June.”

The film immerses the artists in a series of fantasy “worlds” inspired by the exceptional variety of experiences at Resorts World Las Vegas – from day life, nightlife, dining, gaming and entertainment – culminating with the reveal of the resort’s new tagline: Stay Fabulous.

The camera follows a visiting couple as they explore the resort and meet some of its notable citizens – Katy Perry, Luke Bryan, Carrie Underwood, Celine Dion, Tiësto and Zedd – each presiding over their own fabulous domain. As the couple’s magical journey concludes, they lift their gaze from the towering Resorts World Las Vegas façade to see a message written in the sky – “Stay Fabulous.”

The first commercial filmed on a live virtual set, “Stay Fabulous” sets a new standard for Las Vegas resort advertising. Utilizing the most sophisticated virtual set designs, the video merges virtual reality and CGI elements, using game-engine technologies to blur the line between the physical and digital worlds. “Stay Fabulous” marks the first time this technology – previously only used in the production of The Mandalorian – has been deployed in a large-scale commercial shoot.

Produced by Resorts World Las Vegas’s Advertising Agency of Record, Hooray Agency, and Psyop, in partnership with Nant Studios, “Stay Fabulous” will run on television in select markets during the Academy Awards as well as online and streaming services, launching the resort’s first national brand campaign.

It was announced last week that Tiësto and Zedd are resident DJs at Zouk Nightclub and Ayu Dayclub, Las Vegas’s newest day and nightlife experiences opening this summer at Resorts World Las Vegas. Zouk Nightclub, the new innovative 36,000-square-foot space, is poised to become the most technologically advanced nightclub in Las Vegas – from interactive 3D booking maps that will allow guests to see the exact tables they are booking and a digital guestlist providing easy self-entry to a state-of-the-art articulating ceiling with a center focal point called the Mothership. Performances kick off July 3rd with tickets available at zoukgrouplv.com/.

Additional details for the other live performers will be announced in the coming weeks.