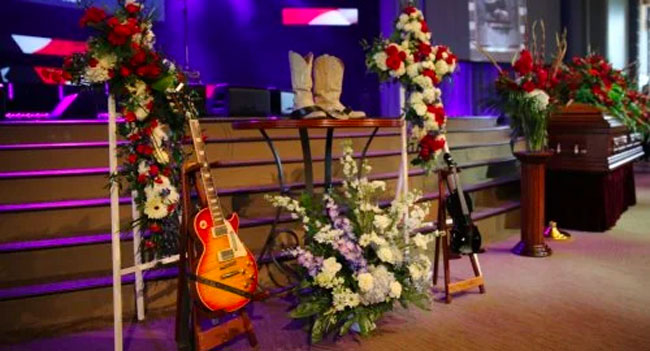 Daniels died on July 6th at the age of 83

Family, friends and hundreds of fans gathered on Friday (July 10th) at World Outreach Church in Murfreesboro, Tennessee, to pay their respects to country and southern rock icon Charlie Daniels.

The funeral service began with Carolyn Corlew, a longtime backup singer for The Charlie Daniels Band (CDB), singing the Bible hymn, “The Lord is My Shepherd/23rd Psalm.” A color guard followed with a march to Daniels’ casket with the U.S. and Tennessee flags, while former U.S. Marine Mark “Oz” Geist recited the pledge of allegiance.

SiriusXM’s Storme Warren led the service, sharing his love and admiration for Daniels who he has long considered his hero and the reason he moved to Nashville.

Watch the full service below.

Daniels passed away on Monday, July 6th, at Summit Medical Center in Hermitage, Tennessee. Doctors determined the cause of death was a hemorrhagic stroke. He was 83. The beloved singer is survived by his wife, Hazel Daniels; son Charles William Daniels and Alaya Nowling and Evan Tubb, whom Daniels considered his grandchildren, as well as “grandbuddies” Taylor Corlew Jenkins and Bailey Wheeler.