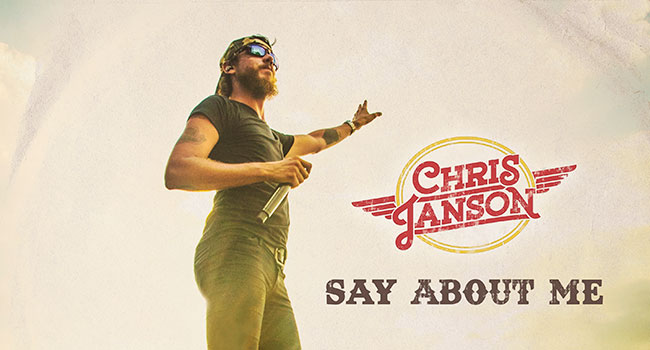 It’d be hard to name someone more grateful for his current success than electrifying entertainer Chris Janson, who on Friday dropped his gratified new rocker “Say About Me”. The uptempo tune is the third pre-release track from his forthcoming album, due later this year. Janson wrote the song that Rolling Stone named one of their “10 Best Country and Americana Songs to Hear Now” alongside Shy Carter and Tommy Cecil. The Boot similarly called it a song “you’ve got to hear” and declared it “a celebration of working hard and cashing in on a heck of a lot of effort.”

As “Say About Me” describes, “I share the wealth, I share the blessings, ‘cause the blessings were shared with me” – even in his other songs, Janson is spreading the “Good Vibes.” His current single of the same name is currently nearing Top 20 at country radio as it surpasses 25 million streams. He has already performed the “feel-good anthem” (Billboard) on stages far and wide, from Live with Kelly and Ryan to Ohio Stadium in a massive concert event alongside “King of Country” George Strait and superstar Blake Shelton.

The hit-making singer/songwriter again teamed up alongside Shy Carter and Tommy Cecil as well as Craig Wiseman for “Waitin On 5,” also available. For fans who want to catch his newest tunes live, Janson recently announced his headlining Ryman Auditorium. Limited tickets remain for the September 25th show. His last experience headlining the famed concert venue in 2018 included a sold-out audience and a surprise invitation from Keith Urban to join the Grand Ole Opry.

In the meantime, Janson will be featured on this Sunday’s CMA Fest special airing at 8 pm ET/PT on ABC. The platinum-selling recording artist is also touring the nation on Chris Young’s Raised On Country Tour and his own headlining performances – with much more to come.