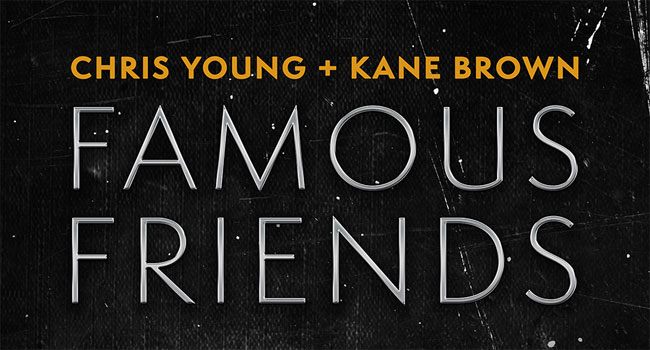 Track is most-added at country radio this week

Multi-platinum performer Chris Young and RCA Nashville labelmate and global entertainer Kane Brown are starting off the new year with the most-added single at country radio as “Famous Friends” tallies a total 53 combined Billboard and Country Aircheck/Mediabase stations. “Famous Friends,” released on November 20th and officially impacted yesterday (Jan 4th), already posting at No. 36 on Billboard and No. 45 on Country Aircheck/Mediabase. The pair talked about their collaboration on The Quad with Chris Young podcast last year.

Written by Chris with Cary Barlowe and Corey Crowder from a headline tour stop in Tampa in 2018, the track was teased by the pair on social media last year. The autobiographical song mentions Rutherford County, where Young grew up in Tennessee, and Brown’s hometown of Hamilton County along with Nashville’s Davidson County – a.k.a. Music City.

An anthemic tribute to the names, faces, and legendary stories that make up each hometown, “Famous Friends” is their first collaboration since working together on Brown’s 2017 song “Setting the Night On Fire.” Additionally, the song reunites the former tour mates from Young’s 2018 Losing Sleep Headlining Tour — which included a sold out hometown show at Nashville’s Bridgestone Arena — and is a full-circle moment since Brown’s first live concert experience as a young country fan was a Brad Paisley and Chris Young tour stop.