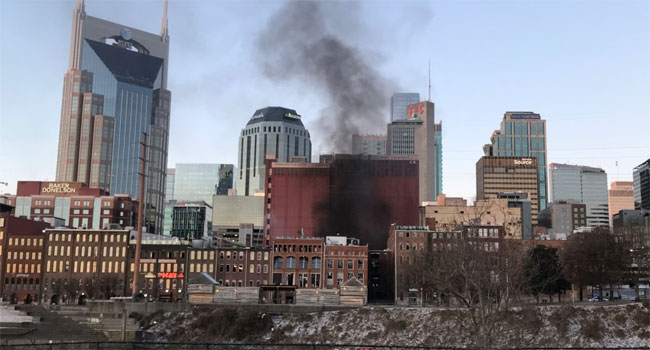 Incident happened around 6:30 am

A vehicle explosion in downtown Nashville woke residents at 6:30 CT on Christmas morning. The large explosion was felt within 40 miles from the explosion across Davidson County, and was linked to an RV parked outside of the AT&T building near the Broadway tourist area. The explosion sent three people to a nearby hospital with non-life threatening injuries but no confirmation as to if anyone was inside of the RV when it exploded, as of press time.

CBS News reports human remains were found at the explosion site, but couldn’t confirm if they were someone connected to the explosion or a victim.

#Nashville Law enforcement sources tell @CBSNews they have found what appear to be human remains near the site of the explosion. They have not indicated whether remains are from someone connected to explosion or from innocent victim +
intelligence source tells #CBS @PatMilton14

The explosion caused significant damage to 41 buildings with many having structural damage. Windows were broken throughout the area with shrapnel hitting buildings as far as five blocks away as billows of smoke filled the Nashville skyline.

Metro PD have released a picture of the RV which was captured on surveillance video. It arrived on 2nd Ave at 1:22 am CT, and residents are urged to contact authorities if they have any information.

BREAKING: This is the RV that exploded on 2nd Ave N this morning. It arrived on 2nd Ave at 1:22 a.m. Have you seen this vehicle in our area or do you have information about it? Please contact us via Crime Stoppers at 615-742-7463 or online via https://t.co/dVGS7o0m4v. @ATFHQ pic.twitter.com/JNx9sDinAH

Metro Police were responding to a call of shots fired a block away from Broadway at around 5:30 am CT. However, when they arrived at the scene, they didn’t see any immediate evidence of shots fired, but spotted a suspicious RV parked at 166 2nd Ave N, and called the hazardous devices unit. The vehicle exploded when the bomb squad responded to the area. Fox 17 reports an officer suffered hearing loss due to the explosion.

Traffic has been restricted a 10 block radius of the area as investigate and clear the scene. Explosive detection dogs were brought in around 11 am CT to search for secondary devices, but police don’t indicate there are more.

“Early this morning, an explosion occurred in downtown Nashville around Second Avenue and Commerce Street,” Tennessee Governor Bill Lee shares. “Please join Maria Lee and me in praying for those who were injured and we thank all of our first responders who acted so quickly this morning.

Video of the explosion has surfaced on YouTube in which you hear, “This area must be evacuated now. If you can hear this message, evacuate now,” before the RV explodes. Eyewitness reports claim the message changed to a countdown starting at 15 minutes.

Resident Buck McCoy lives on 2nd Avenue at the explosion site and went live on Facebook to give a tour of his apartment and the surrounding area. Windows were blown out of his unit as water drenched his apartment. You hear emergency sirens and fire alarms as he also shows the destruction of flames and debris on the street below.

Brian Norwood explains the three rounds of gun fire his family heard before barricading themselves in their apartment.

Police in Nashville verify that "Explosion downtown" was intentional. Seems like there are no serious injuries, but shrapnel hit buildings as far as 5 blocks away. Must have been a massive payload of explosives. #Nashville

Sending all my love to Nashville this morning. These videos are absolutely terrifying. Such a horrific act, especially on Christmas morning. 💔