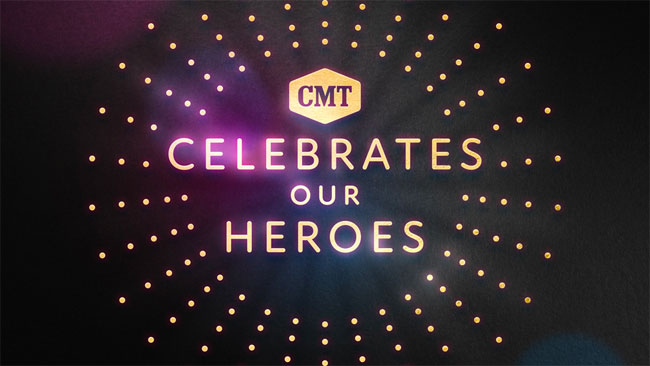 CMT has announced CMT Celebrates Our Heroes: An Artists of the Year Special, an uplifting celebration and virtual tribute to recognize the most vital and inspirational Americans on the frontlines of the COVID-19 pandemic. The two hour special will premiere Wednesday, June 3rd at 8 pm ET/PT on CMT.

The CMT Celebrates Our Heroes special marks a departure from the traditional CMT Artists of the Year format which honors the year’s top country artists with a live televised Nashville-based celebration.

“The CMT Artists of the Year franchise has always been reflective of the important issues of our time, and this year, we all felt it necessary to shift our focus to honoring the real heroes during these unprecedented times,” shares Leslie Fram, Senior Vice President of Music & Talent, CMT. “From the first responders and healthcare workers to members of the military, our educators, food industry workers and so many more, the country music community will come together to honor these heroic men and women. The evening of unity will feature incredible performances, uplifting tributes and a salute to those risking their lives on the frontlines of this crisis.”

CMT is additionally looking to highlight new stories of unsung heroes who have done exceptional things for their communities during the COVID-19 pandemic. Personal stories of those who have positively impacted their community, state and nation can be submitted directly at CMT.com for potential inclusion in the special which include healthcare workers, such as doctors, nurses, pharmacists, ambulance drivers and EMT; food industry workers such as farmers, distributors, migrant workers and truckers; American iIngenuity such as big industry and small businesses who are retrofitting their production lines to provide ventilators, personal protective equipment and hand sanitizers, along with the scientists who are racing the clock to develop effective treatments that will stem the tide until a vaccine is perfected; infrastructure such as educators, delivery drivers, sanitation workers and utility laborers; U.S. military; and first responders.

In previous years, CMT Artists of the Year has been an advocate for important causes, raising both awareness and contributions for those impacted by such natural disasters as Hurricane Harvey, the tragic events at Route 91 Harvest music festival in Las Vegas, and an all-female ceremony dedicated to the women of country music in 2018. Last year, the special celebrated its tenth anniversary and honored Carrie Underwood, Dan + Shay, Kane Brown, Luke Combs and Thomas Rhett as the top artists of the year, with Reba McEntire and Ashley McBryde receiving the “Artist of a Lifetime” and “Breakout Artist of the Year” awards, respectively.

CMT Celebrates Our Heroes: An Artists of the Year Special is executive produced by CMT’s Margaret Comeaux, Switched On Entertainment’s John Hamlin and Amy Lin Johnson; the Executives in Charge of Production are Jackie Barba and Heather D. Graffagnino.