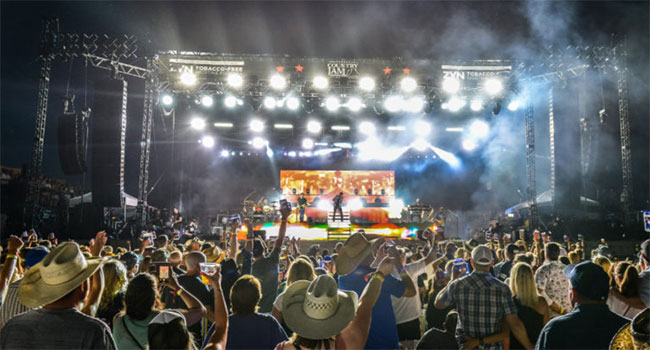 Country Jam has announced country music superstars Dan + Shay, Kane Brown and Toby Keith to headline the four-day festival, with an additional headline artist and two incredible supporting acts to be announced early January. The multistage event surrounded by Colorado’s awe-inspiring red rock landscape will feature more than 15 top country artists and is set for June 18-21, 2020 at the Jam Ranch, just outside of Grand Junction, Colorado.

Country Jam has established itself as the premier country music festival in Colorado for nearly three decades, and 2020 will mark its 29th anniversary in the Grand Junction area. The four-day festival features the biggest stars in country music set in the gorgeous landscape of Western Colorado at the Jam Ranch, which is home to over 4,500 campsites for Country Jam fans. This unique live music experience brings an unparalleled level of talent to attendees year after year.

The festival is produced in part by Neste Live!. Neste Live! is the largest festival talent producer in North America and is part of LNE: Live Nation Entertainment, the world’s leading live entertainment company.

“Our entire team at Neste Live! is excited to continue the tradition of providing top-level country music performers for Colorado,” states Gil Cunningham, President of Neste Live. “I was the original talent buyer for Country Jam in its first years in Grand Junction, and it’s amazing to see the growth of the marketplace and have the opportunity to promote the festival with Visit Grand Junction – one of the most progressive destination marketing organizations in the country.”

Dubbed “Colorado’s Biggest Country Music Party,” Country Jam has brought in nearly 100,000 attendees in recent years. Loyal fans are drawn to the festival by the beauty of the campgrounds and concert venue, and a chance to see country music’s hottest artists.