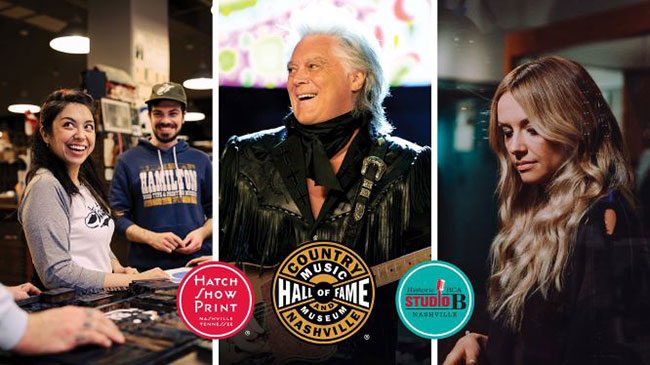 The museum welcomed 1,297,433 guests in 2019, the fifth consecutive year of attendance of more than one million visitors.

The Country Music Hall of Fame and Museum had a record-breaking 1,297,433 guests touring the museum, Historic RCA Studio B and Hatch Show Print in 2019 — marking the fifth consecutive year the organization welcomed more than one million visitors.

In 2019 alone, more than 114,400 museum visitors engaged in over 1,600 educational programs. Through the museum’s ongoing Community Counts program, nearly 5,000 Middle Tennessee youth 18 and under from Davidson, Cheatham, Robertson, Rutherford, Williamson and Wilson counties were able to tour the museum for free.

“We’ve been around and part of Nashville’s community for over 50 years,” states Kyle Young, CEO, Country Music Hall of Fame and Museum. “We rolled the dice and came downtown in 2001. Then, we expanded in 2014. These moves allowed us to double our space, grow our staff and broaden our offerings to tell the ever-evolving country music story. I’m proud to share that our attendance numbers continue to grow, and that in 2019, we welcomed a record number of visitors.”

In 2019, the museum opened exhibitions on Keith Whitley, Kacey Musgraves and Country Music Hall of Fame members Brooks & Dunn and Boudleaux and Felice Bryant, as well as the exhibit American Currents: The Music of 2018.

Other highlights included: Marty Stuart’s artist-in-residence, which consisted of three nights of star-studded, self-curated performances; historic RCA Studio B being named the 2019 Experience of the Year by Travelsphere Holidays
Hatch Show Print celebrating its 140th year and creating iconic and historic posters for each of the NFL’s 32 teams for the 2019 NFL Draft; and sixteen performances in the CMA Theater at the Country Music Hall of Fame and Museum

Additionally, visitors can experience the museum’s continuing exhibition Outlaws & Armadillos: Country’s Roaring 70’s, which looks at the relationship between Austin, Texas, and Nashville during the 1970s, an era of freewheeling cultural and artistic exchange that skirted the status quo and changed country music. The exhibition is open through February 14, 2021.