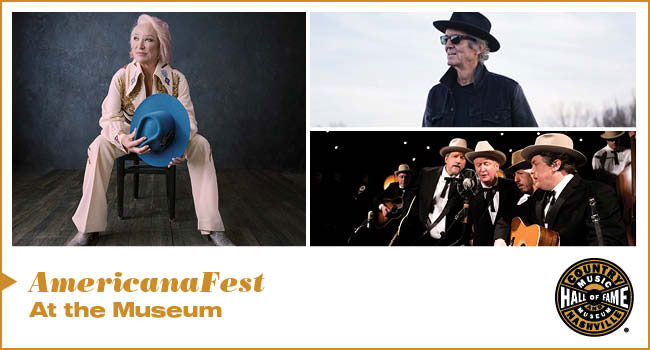 Programs will spotlight Americana and country music trailblazers Sept 11–15th at the museum during the association’s annual music festival and conference.

The Americana Music Association and the Country Music Hall of Fame and Museum will partner once again to offer one-of-a-kind programs during the association’s 20th annual AMERICANAFEST.

“This programming, curated in partnership with the Country Music Hall of Fame and Museum, shines a deserving light on some of the most inspiring musicians in the world,” states Americana Music Association Executive Director Jed Hilly. “We’re thrilled to be working with Kyle Young and his team for the 13th consecutive year to create unforgettable moments for our attendees that give them the opportunity to not only know artists who have helped shape the community, but also the stories behind their evergreen songs.”

“We are happy to partner once again with the Americana Music Association to bring educational programming to their members and guests who come to Nashville from all over the world,” says museum CEO Kyle Young. “For us, it is important to highlight country music’s rich tradition and its ever-evolving story through dynamic programs that provide insight and speak directly to music fans of all genres.”

Programming details are below. All programs take place in the museum’s Ford Theater.

Conversation and Film Screening: Nitty Gritty Dirt Band and “The Making of Will the Circle Be Unbroken, Volume II”

AMERICANAFEST activities at the museum commence Wednesday, Sept. 11, with a special film screening and conversation between Nitty Gritty Dirt Band co-founder Jeff Hanna, bluegrass virtuoso Sam Bush and Craig Shelburne, managing editor of the Bluegrass Situation. Hanna will share clips from the out-of-print 1989 documentary, The Making of Will the Circle Be Unbroken, Volume II, produced by video pioneer Joanne Gardner and Rosanne Cash. The film captures the formative band in the studio recording their groundbreaking album with Rosanne, Johnny and June Carter Cash; Jerry Douglas; Levon Helm; John Hiatt; Bruce Hornsby; New Grass Revival; Mark O’Connor; John Prine; Randy and Earl Scruggs and others. Celebrating its 30th anniversary this year, Will the Circle be Unbroken, Volume II won three GRAMMY® Awards and the 1989 CMA award for the Album of the Year.

NPR Music’s Ann Powers sits down with Carlene Carter, Shawn Colvin, Amythyst Kiah and Maria Muldaur for Turning the Tables, an ongoing series committed to telling untold or hidden-in-plain-sight stories of American music. This edition celebrates a slate of music’s founding mothers, with Carter, Colvin, Kiah and Muldaur sharing songs from music matriarchs who have inspired them, followed by performances of their own works that exhibit these influences.

Tanya Tucker joins singer and SiriusXM host Elizabeth Cook for a look back on her nearly five-decade career, which has included outlaw country staples “Delta Dawn” and “Would You Lay with Me (In a Field of Stone).” Tucker will also perform and offer insight into her upcoming record While I’m Livin’, her first full release in more than 15 years. Presented in partnership and recorded for later broadcast on SiriusXM Outlaw Country in support of the museum’s exhibit Outlaws & Armadillos: Country’s Roaring 70’s. This program is made possible by the Riverview Foundation.

Attendees will be treated to a visit from Rodney Crowell as he reflects upon his GRAMMY-winning musical accomplishments and new album, TEXAS. During a discussion with the museum’s Senior Director, Producer and Writer Peter Cooper, the Houston native will talk about his latest body of work, which features guest appearances by Steve Earle, Vince Gill, Willie Nelson and Ringo Starr. Presented in partnership and recorded for later broadcast on SiriusXM Outlaw Country in support of the museum’s exhibit Outlaws & Armadillos: Country’s Roaring ’70s. This program is made possible by the Riverview Foundation.

BJ Barham (American Aquarium), Jonathan Byrd and Sarah Siskind lead the weekend’s festivities with a songwriter session focused on their North Carolina origins. The three songwriters will delve into their latest projects and share how their creative processes are informed by their ties to the great Appalachian state. This program will be streamed live at countrymusichalloffame.org/streaming. This program is made possible by the Riverview Foundation.

Shawn Sahm, son of the late Doug Sahm, guides audience members through a musical exploration of his father’s legacy. A prodigy who played onstage with Hank Williams at just 11 years old, Doug’s enduring impact on the Americana music scene began with 1960s rock hits like “She’s About a Mover” as part of the Sir Douglas Quintet. A revered solo career followed, including collaborations with Bob Dylan, the Grateful Dead and Flaco Jimenez. In 1989, he formed the GRAMMY-winning supergroup the Texas Tornadoes with his former Quintet bandmate Augie Meyers, Freddy Fender and Jimenez. Shawn will lead a tribute of Doug’s best-known songs with band members Bobby Flores, Michael Guerra, John Jorgenson, Freddie “Steady” Krc, Charlie Sexton and Neal Walker. Delbert McCLinton, Kimmie Rhodes and others are scheduled to make guest appearances. This program will be streamed live at countrymusichalloffame.org/streaming. This program is in support of the exhibit Outlaws & Armadillos: Country’s Roaring ’70s and made possible by the Riverview Foundation.

Film Preview, Conversation and Performance: The Earls of Leicester

Sunday rounds out this year’s AMERICANAFEST activities at the museum with The Earls of Leicester, a GRAMMY-winning group made up of Jerry Douglas, Barry Bales, Shawn Camp, Charlie Cushman, Johnny Warren and Jeff White. The bluegrass mavericks will premiere Live from the CMA Theater in The Country Music Hall of Fame, a film featuring performances from their two historic shows at the museum’s CMA Theater last year. A discussion and brief performance by the band follows the film screening.

AMERICANAFEST 2019 will feature more than 300 acts performing in close to 70 venues across Nashville with multiple educational workshops and panels, making it the city’s most comprehensive music education event. Conference registrations may be purchased here at the current standard rate of $449 ($349 for Americana Music Association members) until Sept. 1. Rates will increase to $499 on Sept. 2 for walk-up admission.

Program dates, times and additional information are included in the detailed schedule below. Several programs will be streamed live (check the schedule below) at countrymusichalloffame.org, and all are presented in partnership with the Country Music Hall of Fame and Museum.

Advanced reservations are limited. Additional passes may be available on the day of the program.