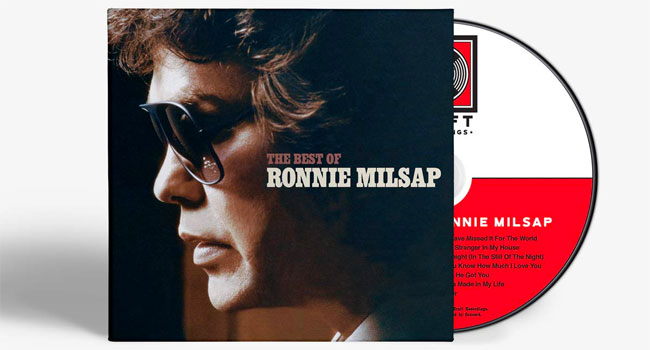 Craft Recordings is excited to announce The Best of Ronnie Milsap – a 12-track collection of chart-topping favorites from the country legend’s extensive catalog. The compilation, which primarily spotlights Milsap’s crossover hits of the late ’70s–’80s, will be available on CD on May 29th. An expanded digital version is currently available on all DSPs and streaming platforms.

Audio for the CD was remastered by the GRAMMY Award-winning engineer Paul Blakemore. New liner notes from music journalist Joe Marchese round out the collection.

Craft’s parent company, Concord, acquired many of Milsap’s RCA recordings last year in an effort to thoughtfully curate his most important work. Concord is proud to be the proprietors of 16 of Milsap’s greatest albums, spanning 1977–2006, which among them have garnered 22 No. 1 country singles, three gold-certified albums, one No. 1 country album, two CMA Albums of the Year and four GRAMMY Awards, including a GRAMMY for Best Country Collaboration with Vocals on “Make No Mistake She’s Mine” with Kenny Rogers.

Country Hall of Fame and Grand Ole Opry inductee Ronnie Milsap stands as one of the most influential artists in the genre’s history, and one of the few country stars to find repeated crossover success in the pop market. As one of the best-selling musicians of the 1970s and ’80s, Milsap scored a whopping 35 No. 1 hits on Billboard’s Hot Country Songs chart, coming in just behind George Strait, who tops the record with 44 No. 1 singles, and Conway Twitty, who boasts 40 No. 1 songs. To date, the six-time GRAMMY Award winner has released a total of 28 studio albums and 69 singles – 49 of which were in the Top Ten. The artist has received eight Country Music Association awards and four Academy of Country Music awards, including the prestigious Pioneer Award in 2002.

But Milsap beat the odds to reach these great heights. Born in 1943 with a congenital disorder that rendered him nearly completely blind, the artist was abandoned by his mother when he was just one. His impoverished grandparents, who lived in the mountains of North Carolina, took the child in and enrolled him in a school for the blind. It was there that Milsap studied music – mastering the piano at a young age – but it was also at the price of endless physical abuse by the school’s teachers, whose actions left him completely blind.

Life improved, however, as he neared adulthood. Milsap pursued his love of music, and, like many teenagers of the era, had fallen under the spell of emerging rock ’n’ roll artists like Elvis Presley, Little Richard and Jerry Lee Lewis. By 1965, the artist landed his first hit on the R&B charts – “Never Had It So Good” (written by the celebrated duo Ashford & Simpson). A move to Memphis found the artist working with acclaimed producer Chips Moman, finding success as a session musician (even recording with his teenage hero, Elvis), and releasing a self-titled debut album in 1971.

A year later, a chance encounter with country legend Charley Pride forever changed the direction of Milsap’s career. Pride took the artist under his wing, urging him to relocate to Nashville. Pride’s keen ear and intuition paid off, and Milsap’s debut single as a country artist, 1973’s “I Hate You,” was a breakout hit, peaking at No. 10 on the Billboard Hot Country Singles chart. One year later, he scored his first two No. 1 country hits with “Pure Love” and “Please Don’t Tell Me How the Story Ends” – the latter of which earned the artist his first GRAMMY Award.

The second half of the decade only got better for Milsap. From 1976–1978, the artist released a string of seven No. 1 country hits in a row, including the title track from his CMA Award-winning 1977 LP, It Was Almost Like a Song, launching Milsap into broader success as a crossover star. Aside from topping the Hot Country Singles chart, “It Was Almost Like a Song” peaked in the Adult Contemporary Top Ten and broke into the Top 20 on the Billboard Hot 100. He followed that with another universally popular song, “What a Difference You’ve Made in My Life.”

Milsap continued to find success as a crossover sensation in the ’80s, releasing hits like “Smoky Mountain Rain,” the Burt Bacharach/Bob Hillard-penned “Any Day Now” – off 1982’s Inside – and “Stranger in My House,” from his 1983 LP Keyed Up. The album also spawned the singer’s 25th No. 1 country single, “Show Her.”

In 1985, the unstoppable superstar topped the Country Albums chart with 1985’s Lost in the Fifties Tonight, and scored his fourth GRAMMY Award for title track “Lost in the Fifties Tonight (In the Still of the Night).” Not only was the song a No. 1 country hit but it also peaked in the Adult Contemporary Top Ten and stood as the best-selling country song of 1985. Milsap continued his streak through the end of the decade, scoring his last chart-topping hit with 1989’s “A Woman in Love.”

In his liner notes, Joe Marchese writes that this collection of songs “celebrates Ronnie Milsap’s rich legacy as both an interpretive singer and a musician,” adding that the selections “are imbued with indomitable spirit and abundant heart. Elegant, emotional, and expressive: This is the sound of Ronnie Milsap. His life is almost like a song…but not one that’s much too sad to write. Rather, it’s one of pure triumph.”