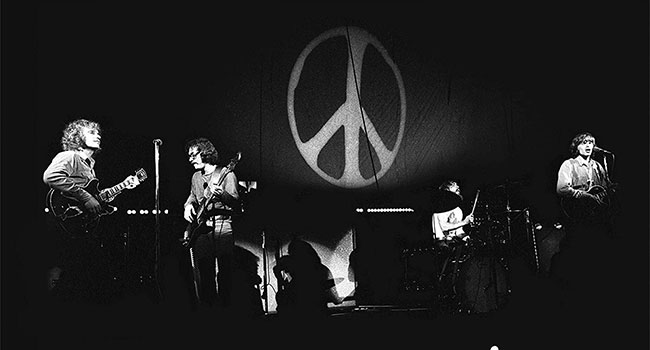 Craft Recordings is pleased to announce the release of Live At Woodstock, capturing Creedence Clearwater Revival’s full, hour-long performance from the historic festival. Out August 2nd, Live At Woodstock will be available as a 2 LP vinyl set, housed in a gatefold jacket, as well as on CD and digital platforms (including hi-res 96/24). Fans can preview the album with the first digital single, “Born on the Bayou,” available on iTunes and streaming services.

In August of 1969, as they took the stage at Woodstock, Creedence Clearwater Revival were at the peak of an incomparably prolific year, and on the verge of becoming one of the biggest bands in the world. Their Southern-steeped sound (which brazenly stood out from the reigning psychedelia of the day) was a mainstay on the airwaves, thanks to hit singles “Proud Mary,” “Bad Moon Rising,” and “Green River,” while the band was playing shows to packed crowds across North America. Just eight months earlier, John Fogerty, Tom Fogerty, Doug Clifford, and Stu Cook released their second LP, Bayou Country, following the modest success of their 1968 self-titled debut. By late spring, the album had broken into the Billboard Top Ten. Astonishingly, the band would release two more Top Ten albums before the end of 1969: Green River, which hit stores just a few weeks before Woodstock (and became their first No. 1 record), followed by Willy and the Poor Boys, in November.

Creedence were slotted for a prime Saturday night spot at Woodstock, following the Grateful Dead. Highly in demand, the band had headlined many of the larger festivals that summer, including the Atlantic City Pop Festival, the Newport Pop Festival in Northridge, CA, as well as main stages in Atlanta and Denver. To many artists, the three-day concert in Upstate New York was seemingly just another stop on the tour; little did they know that Woodstock would become a defining moment in pop-culture history. Creedence took the stage later than planned, in the wake of an extra-long set by the Dead. It was after midnight on Sunday, August 17th, and many of the attendees had retired to their tents. CCR declined to be included in the 1970 documentary Woodstock and the film’s soundtrack album, despite a searing performance on stage. Unfortunately, because of their absence from the film and soundtrack, it is easy to forget that CCR was a top-billed act at Woodstock — let alone even at the festival.

Now, 50 years later, Live at Woodstock offers fans a front-row seat to relive Creedence Clearwater Revival’s stirring, hour-long set as it was performed that night. Kicking off with “Born on the Bayou,” the album features the band’s biggest singles of the day, plus selections off their first three LPs, including “Commotion,” “Ninety-Nine and a Half (Won’t Do)” and “Bootleg.” Full of creative energy, John, Tom, Stu, and Doug delve deep into their music, playing extended improvisations of “I Put a Spell on You,” “Keep on Chooglin’” and “Suzie Q.”

Following their performance at Woodstock, Creedence ended 1969 on a high note: making their second appearance of the year on The Ed Sullivan Show, dropping the anthemic single “Fortunate Son” (which recording would go on to be added to the National Recording Registry by the Library of Congress for being “culturally, historically, or aesthetically significant”), and recording their fifth studio album, Cosmo’s Factory, which would be released in 1970.

Though Creedence Clearwater Revival were only active for a brief period (1968 to 1972), they found creative achievement and global success matched by few others in such a short span of time. Formed in 1968, the Northern California-based rock group tapped into a rich, traditional seam of American music that incorporated elements of swampy blues, country, rockabilly, gospel and folk. Over the course of their time together, Creedence released seven studio albums on Fantasy Records (two of which would peak at No. 1, and three of which would be in the Billboard Top Ten). They scored nine Top Ten singles and played over 150 shows around the world.

To-date, Creedence Clearwater Revival remain one of the best-selling bands of all time and are one of the few acts to receive a coveted Diamond certification from the RIAA, marking ten million units sold in the U.S. for their 1976 compilation, Chronicle: 20 Greatest Hits. Half a century later, the band’s music endures — in just the last few years alone, their songs have appeared in some of the most popular films (The Post, War Dogs, Suicide Squad), TV shows (The Voice, The Strain, Good Girls Revolt) and video games (Mafia III, Watch Dogs II, Crackdown 2), allowing a new generation of fans to discover classics like “Fortunate Son,” “Bad Moon Rising” and “Have You Ever Seen The Rain?”